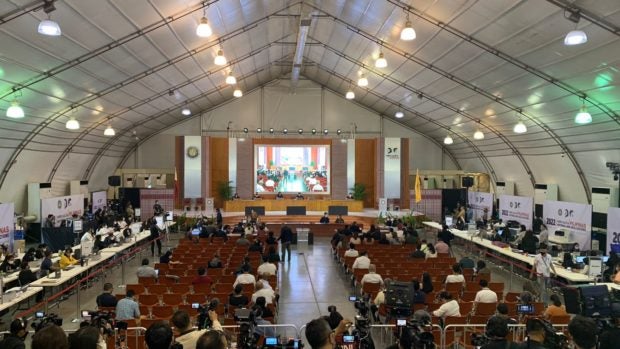 FILE PHOTO: Comelec personnel readies the Philippine International Convention Center in Pasay City where the National Board of Canvassers will be canvassing votes cast during the May 2022 national elections. INQUIRER/MARIANNE BERMUDEZ

MANILA, Philippines — A mix of neophyte, returning, and reelectionist senators are set to be proclaimed as winners in this year’s elections on Wednesday in Pasay City.

The Commission on Elections, sitting as the National Board of Canvassers (NBOC), approved Tuesday a recommendation of the supervisory committee to proceed with the proclamation of the winning senatorial candidates on May 18.

The 12 senatorial candidates to be proclaimed were the following:

The supervisory committee recommended that the NBOC proceed with the proclamation of the so-called Magic 12 even without the votes from Lanao del Sur which certain areas are set to hold special elections.

According to the committee, the votes from Lanao del Sur will not affect the senatorial rankings.

The proclamation of winning party-list groups, however, was put on hold pending the votes from Lanao del Sur.

Unlike in the senatorial race where winners are determined based on rankings, the party-list elections follow a computation to identify the number of seats the winning groups will get in the House of Representatives.

For this election, there are 63 seats available for party-list groups in the lower chamber.