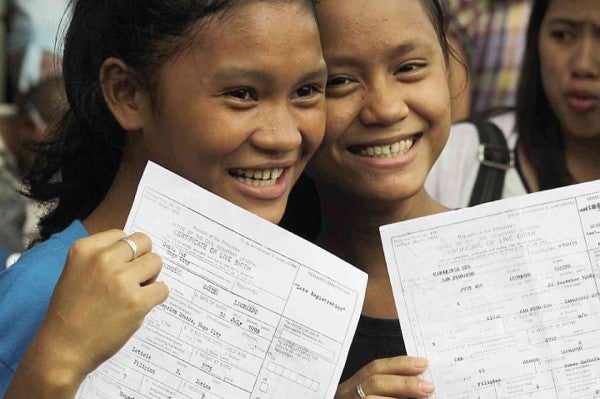 FILE PHOTO: To prove that they are qualified to register as voters for the Sangguniang Kabataan, two teenagers pose with their birth certificates outside the Commission on Elections office in Naga City, July 2013. JUAN ESCANDOR JR./INQUIRER SOUTHERN LUZON

Duterte on May 6 signed Republic Act No. 11768, amending certain provisions of the Sanggunian Kabataan Reform Act of 2015. A copy of the new law was released to the media on Tuesday, May 17.

Under the measure, all SK members, including the treasurer and secretary, should receive a monthly honorarium at the end of every regular monthly SK meeting, provided that it should not exceed 25 percent of the SK’s funds and should not exceed the compensation received by the SK chairperson.

Their respective local government units may also provide additional pay and social welfare contributions and hazard allowance to the SK chairperson and other elected and appointed members of the youth council through local ordinances.

SK members should likewise be entitled to civil service eligibility based on their years of service to the barangay, RA No. 11768 states.

Other benefits of SK officials include:

The new law also mandates every SK to appoint its secretary and treasurer and set the schedule of regular meetings and Katipunan ng Kabataan assemblies within 60 days of assumption into office.

The appointed SK treasurer should have an education and career background relating to either business administration, accountancy, finance, economics or bookkeeping.

Members are likewise allowed to hold fund-raising activities, which are in line with the development plan, and the proceeds of which will be tax-exempt and accrue to the general fund of the SK.