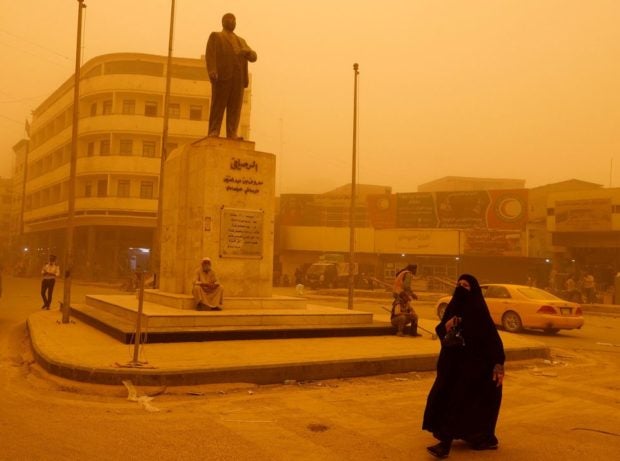 A woman walks past a statue of Iraqi poet Abdel Ghani Maarouf al Rusafi during a sandstorm in Baghdad, Iraq, May 16, 2022. REUTERS

BAGHDAD — A heavy sandstorm in Iraq, the latest of what Iraqis say is an unprecedented number to hit the country in recent weeks, closed some state schools and offices and halted flights at Baghdad International Airport on Monday.

Authorities in Baghdad, including the Education Ministry, declared a day off for local government institutions, with the exception of health services. Hundreds of people across the capital and southern cities went to hospitals with breathing difficulties, medical officials said.

Baghdad International Airport said in a statement it was closing its airspace and halting all flights until further notice because of low visibility.

At least one sandstorm a week has hit Iraq in the past few weeks in what Iraqis say is the worst such spate in living memory.

“It’s every three or four days now,” said taxi driver Ahmed Zaman, 23. “It’s clearly a result of climate change and lack of rain, whenever there’s wind it just kicks up dust and sand.”

In Baghdad and southern Iraqi cities, a red haze of dust and sand reduced visibility to just a few hundred feet.

“We’ve had 75 cases of people with respiratory problems,” said Ihsan Mawlood, an accident and emergency doctor in a Baghdad hospital. “We’re treating patients with oxygen machines if necessary.”

Iraq is the fifth most vulnerable country in the world to the climate crisis, according to the United Nations.

Drought and extreme temperatures are drying up farmland and making large parts of Iraq barely habitable during the summer months. The country posted record temperatures of at least 52 degrees Celsius in recent years.