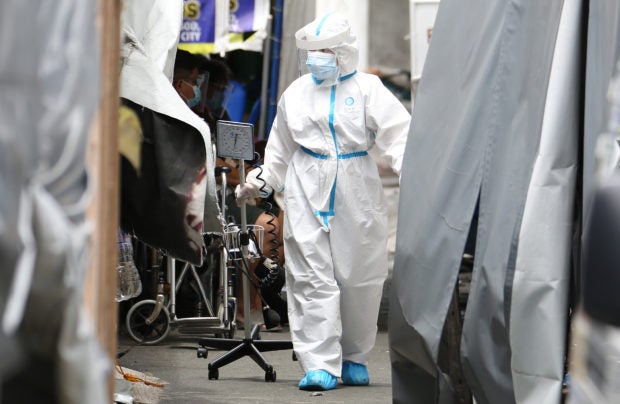 MANILA, Philippines — Frontliners and other personnel employed in health facilities who had been infected with COVID-19 this year can now expect to receive compensation from the Department of Health (DOH).

The Department of Budget and Management (DBM) on Sunday said it released last Friday P1.08 billion to the DOH to cover the COVID-19 sickness and death compensation of health workers.

This represents the entire allocation under the General Appropriations Act of 2022 for the sickness and death benefits of health workers who contracted COVID-19 in the line of duty.

Last May 12, the DBM and DOH issued the implementing guidelines for this compensation package covering the fiscal year 2022.

Under the rules, both health care and non-healthcare workers in medical facilities who experienced a mild or moderate COVID-19 case will get P15,000.

Those who were downed by severe or critical COVID-19 infection, meanwhile, will receive P100,000.

“P1 million is allotted for the family of health-care workers and non-healthcare workers who died due to COVID-19 while in line of duty,” the DBM said in a statement.

The joint DBM-DOH circular said this compensation scheme would be granted to qualified beneficiaries “without prejudice to other existing benefits provided under applicable government insurance systems and their governing laws.”

There will be no double-dipping on this taxable compensation, “except in cases of reinfection,” the circular said.

The DBM said that since the fund release was sourced from the DOH’s 2022 agency budget, the latter would transfer the compensation funds to DOH-retained and corporate hospitals, its treatment and rehabilitation centers, centers for health development, and other attached agencies and institutions.

The allowances and benefits of health workers have been a touchy issue during the pandemic because of their delayed release.

Early this month, health workers again complained about not getting the benefits they were supposed to receive last year because of some problems at the DOH.

Jao Clumia, the spokesperson for the Private Hospital Workers Alliance of the Philippines (PHWAP), which represents 63,772 health workers, then told the Inquirer that a number of medical front-liners were surprised when their applications for claims were denied by the DOH.

When they asked why their claims for benefits due last year were declined, they were told it was because they used an old form, but the DOH never bothered to give the new forms or even inform hospitals about them.

“I’m not sure if they really want to disburse [the benefits] because they are making it difficult for claimants to get their share,” said Clumia, who is also the president of the St. Luke’s Medical Center Employees Association.

Clumia was referring to benefits that were provided under Republic Act No. 11494, or the Bayanihan 2 law, which was enacted in September 2020.

Many health workers received benefits under that law and the validity of the allocations under that law was extended under RA 11519, but that extension lapsed in June 2021.

President Duterte had ordered the release of funds for health workers’ benefits in August and the DOH said in October that the funds had already been released and were being distributed.

But when PHWAP complained that most of its members had not received their benefits, Health Undersecretary Maria Rosario Vergeire said the delay was only because of “lapses” in application forms.

Clumia said he again raised the issue with some health officials but did not receive a clear explanation.

Last January, the DOH announced that it would replace the special risk allowances being given to health workers with the One COVID-19 Allowance (OCA), which it described as “more inclusive and responsive.”

According to the DOH, the OCA would be distributed pro rata to all health workers involved in the COVID-19 response depending on their COVID-19 exposure classification.

The OCA has an allocation of P50 billion in the 2022 budget, but only P7.9 billion has been approved and the rest of the fund was classified “for later release.”

“Considering the expected high number of eligible health workers, the DOH is constantly in coordination with the Department of Finance to ensure that the remaining P42 billion currently lodged as unprogrammed funds will be prioritized to ensure the implementation of the OCA until the state of national emergency has been lifted,” the DOH said.

Under RA 11712, health workers should receive an “emergency allowance” for every month of service during a state of public health emergency.

Alliance of Health Workers ‘disappointed’ in bill on frontliners’ benefits