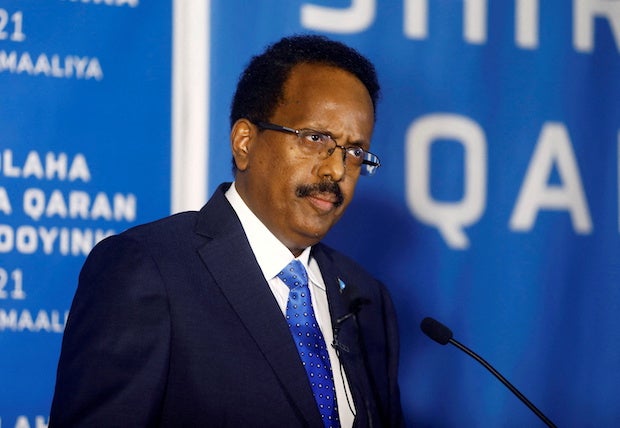 MOGADISHU — Blasts rang out on Sunday in the Mogadishu airport area where parliament was meeting to choose Somalia’s new president in a vote essential to keep foreign aid coming to the impoverished nation tortured by three decades of civil war.

Half a dozen residents and a Reuters reporter heard what sounded like mortar shells. Somalis are used to frequent attacks on state institutions from Islamist insurgents.

“I counted three big sounds of mortar shells landing in the direction of the airport. We are shocked to hear those sounds of mortars when Mogadishu is under a complete curfew. Who is firing them?” said one of the residents, Halima Ibrahim.

There was no immediate word on any damage or casualties.

One source inside the heavily-guarded airport hangar, where the vote was taking place, told Reuters no explosions had been heard from inside, though there was a tumult of noise during counting from a first round of votes by lawmakers.

In a crowded field of 35 aspirants, former presidents Sharif Sheikh Ahmed and Hassan Sheikh Mohamud were the frontrunners, according to analysts, even though their administrations had failed to stem corruption or conflict.

The United Nations-backed vote was delayed by over a year due to squabbling in government but must be held this month to ensure a $400 million International Monetary Fund program.

It takes place during Somalia’s worst drought in four decades, and against a depressingly familiar background of attacks by al Shabaab rebels, in-fighting among security forces, and clan rivalries.

Though just holding the process was a success of sorts, many in the country of 15 million people were skeptical of real progress. Leading candidates were old faces recycled from the past who had done little to help them, and such votes were traditionally dominated by bribery, they complained.

Somalia is still unable to hold a direct popular vote due to insecurity, with the government having little control beyond the capital. African Union peacekeepers guarded the site within an Iraq-style “Green Zone” where the politicians met.

Two or three rounds of voting were expected, with a result likely by late evening.

“The only hope we have is this election,” said medical student Nur Ibrahim.

“There is no life in Somalia. We study and then get bombed by terrorists. If there is no peace, education has no use.”

Only one woman was standing, former foreign minister Fawzia Yusuf Adam, but was not expected to garner significant support in the strictly patriarchal society.

Ahmed, a former Islamist, took over a Western-backed transitional government in 2009, establishing the national army and helping push al Shabaab out of Mogadishu, though it came back strongly in the regions. The other former president, Mohamud, was a peace activist and academic.

Read Next
Finland, Sweden already at heart NATO members – Germany’s Baerbock
EDITORS' PICK
Beyond the Chocolate Hills: A farm-to-table, heritage culinary adventure of Bohol
MyCitiHomes premiers PH’s first 3-star certified BERDE District residential development
‘Crash Landing on You’ couple confirms pregnancy
Enrile contracts COVID-19: ‘To my critics and enemies, I am not going to die yet’
Metro Manila’s COVID-19 positivity rate jumps from 3.9% to 5.9% — OCTA
House energy committee chair Arroyo bats for cheap electricity
MOST READ
Duterte: It was correct for Bongbong Marcos to ‘decline’ presidential debates
Enrile contracts COVID and snipes at critics, foes: ‘I am not going to die yet’
Russia steps up missile strikes on Ukraine as G7 leaders gather
Dennis Padilla answers Leon Barretto’s open letter: ‘Been reaching out to you for 15 years’
Don't miss out on the latest news and information.