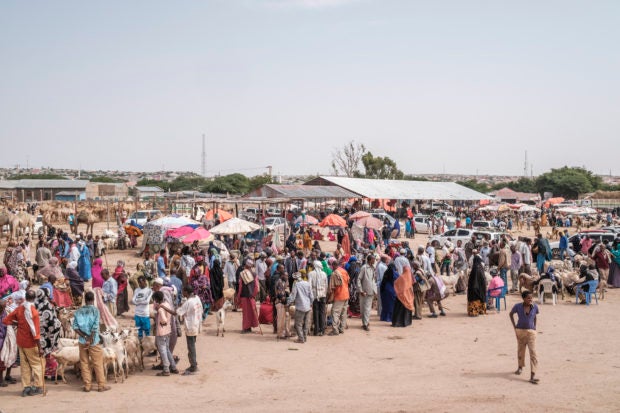 People trade during a livestock market in the city of Hargeisa, Somaliland, on September 15, 2021. AFP

MOGADISHU — Somalia on Tuesday accused Somaliland, a breakaway state not recognized by other nations, of forcibly evicting hundreds of people from a border town, as the UN’s emergency response agency warned of a brewing crisis.

Fleeing families told AFP that armed police targeted southern Somali residents in the border town of Las Anod on Sunday, storming their homes, businesses and schools before ordering them to leave all belongings and immediately board trucks out of the city.

Authorities in Somaliland said the operation was in response to a security threat.

Las Anod has traditionally hosted thousands of people who fled violence in southwestern Somalia years ago, and witnesses said they were shocked by the evictions.

“It was a horrible operation and the police showed no respect to women and children,” Mohamed Abdiwahid told AFP.

Others said they had received no warning from the police or local authorities and were forced onto trucks without their families.

“We don’t know what is happening and some of us are traveling without (our) children”, Ahmednur Ali said by telephone.

“They could have told us to leave and give us some time to prepare, we have left everything we worked for behind”, Abdullahi Samaan, another evicted man, told AFP.

Somalia’s Prime Minister Mohamed Hussein Roble told a press conference that the operation was “a misfortune”.

“It is unfortunate… that Somali people who stayed in a Somali territory were sent back with claims that they come from the south,” Roble said.

“This is history in the making and I hope people from Las Anod will respond to this and show… that Somalia is for all Somalis.”

“We call on the Somaliland administration to let these people freely go back with their belongings and children and not treat them inhumanely as they are doing,” he told reporters.

But Somaliland’s foreign ministry defended the operation, saying “the decision to deport a selected number of individuals… was motivated by issues pertaining to security including appeals from the local communities and authorities in Las Anod”.

“Intelligence reports and consultations provided clear indication that these individuals were putting the safety of the local population at risk,” it said in a statement.

The UN Office for the Coordination of Humanitarian Affairs urged restraint and warned that “the situation has the potential to stoke tensions and exacerbate vulnerability with profound humanitarian consequences.”

Somaliland declared independence from Somalia during the 1991 civil war and has thrived as a comparative beacon of stability, but is not diplomatically recognized by any other nation.

Somalia fiercely opposes Somaliland’s claims to independence and considers the region part of its territory, though in reality Mogadishu exercises little authority over its affairs.

Book fair turns the page for literature in Somaliland