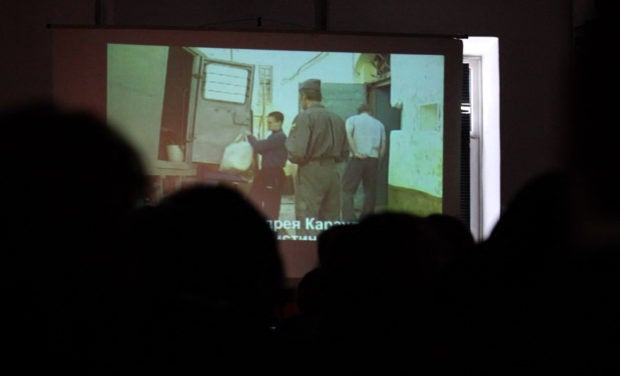 People watch a documentary about what its creator called torture cases in a pre-trial prison in Siberia’s city of Irkutsk during the film presentation in Moscow, on February 21, 2011. AFP FILE PHOTO

MOSCOW — Russian authorities announced Tuesday a probe into alleged rape after the publication of a harrowing video of torture in a prison infirmary, part of a massive trove of secret files obtained by activists.

The anti-torture project Gulagu.net, which has sources inside Russia’s vast prison system, has obtained more than 1,000 video files allegedly showing instances of torture in prisons across the country.

Late Monday, Gulagu.net published a video of a naked man being violated with what appears to be a stick at a prison hospital treating tuberculosis patients in the central city of Saratov. The man, who is tied to his bed, is screaming in pain.

Speaking to AFP, Vladimir Osechkin, who runs Gulagu.net, said the group had received this and other videos — allegedly recorded using prison equipment — from a Belarusian citizen who had served jail time in Saratov.

He was released in February and has been sending video files to Gulagu.net since March.

“We call him our Belarusian Snowden,” said Osechkin, who is based in France.

“It is the first time that human rights defenders have obtained such a colossal amount of information proving the systemic nature of torture in Russia.”

On Tuesday, the Federal Prison Service (FSIN) announced a probe, saying a team of Moscow-based FSIN employees had been dispatched to Saratov to “verify the accuracy of the information” in the video.

The probe is being overseen by “the leadership of the Federal Prison Service”, FSIN said in a statement sent to AFP.

Also Tuesday, the regional branch of the Investigative Committee, which probes major crimes in Russia, launched an investigation into “violent acts of a sexual nature,” it said in a statement.

The crime carries a maximum penalty of 10 years behind bars.

For its part, the prosecutor general’s office launched its own inspection of the treatment of prisoners in Saratov, the RIA Novosti news agency reported.

President Vladimir Putin’s spokesman said the Kremlin was aware of the video.

“If the authenticity of these materials is confirmed, then, of course, this is a reason for a serious probe,” Dmitry Peskov told reporters.

“But first it’s necessary to quickly but calmly sort this out and establish the authenticity of these materials.”

Later Tuesday a source told the Interfax news agency that the head of the FSIN’s Saratov branch had submitted a letter of resignation.

Osechkin accused the Russian authorities of doing everything to cover up abuses in prisons for years.

“The Russian authorities are being hypocritical and are doing everything they can to distance themselves from this torture conveyor belt,” he said.

“This torture conveyor belt was created by FSIN and FSB generals and was used to suppress the will of the convicts,” he said, also referring to the domestic intelligence agency.

Osechkin said the group planned to submit the files to the Council of Europe and the United Nations.