From vendor to mayor in town in Eastern Samar 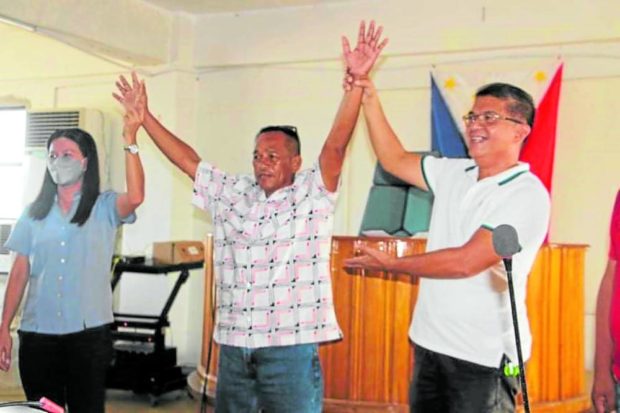 PROCLAIMED Rodrigo “Onoy” Rivera (center), a vegetable vendor, is proclaimed mayor of Dolores town, Eastern Samar on May 11, winning against a scion of a established political clan in the municipality. PHOTO COURTESY OF FRANCIS LIZARES

BORONGAN CITY—Tired of the town’s old political faces and big names, vegetable vendor Rodrigo Rivera decided to run for mayor as an independent candidate and challenged a political giant in Dolores town in Eastern Samar province.

Rivera lacked campaign funds or machinery but he had volunteers in abundance who believed in his dream for a better Dolores.

The town’s residents apparently shared his aversion for putting back in office the same familiar names because in last Monday’s elections, the 62-year-old market vendor, who only reached second year in high school, won against Dr. Zaldy Carpeso of Partido Demokratiko Pilipino–Lakas ng Bayan, a medical professional and brother of the town’s incumbent mayor and now vice mayor-elect Shonny Niño Carpeso. Rivera got 11,508 votes while Zaldy received 10,946 votes or a difference of 562 votes.

The Commission on Elections on May 12, proclaimed Rivera the new mayor of Dolores, a third-class municipality that has 30,124 voters from 46 villages.

Rivera told the Inquirer that he initially prepared three certificates of candidacy (COCs) last year: one for mayor, another for vice mayor, and one for councilor. Upon receiving information that the Carpeso brothers would vie for the two top spots in Dolores town, Rivera decided to submit his COC for mayor.

“I didn’t want to leave the mayor’s seat unopposed and dominated by the town’s politically established Carpeso family,” he said in Waray.

According to Rivera, many people in Dolores town backed his platforms to make government aid accessible to everyone, especially the poor. The mayor-elect vowed to focus on improving basic service infrastructure, such as classrooms, streetlights, hospitals and drainage systems. He would also concentrate on livelihood programs, and maintain peace and order in the town with the help of the military and police.

Rivera was unfazed that he would assume as mayor and likely face an opposition-dominated municipal council. Outgoing Mayor Carpeso, as vice mayor, will preside over the town council that counted six of the newly elected councilors as his allies.

Rivera instead appealed to his fellow elected officials to work with him “since our duty is to serve the people.”

“As fellow officials, I hope we’ll share the common goal to achieve greatness,” he said.