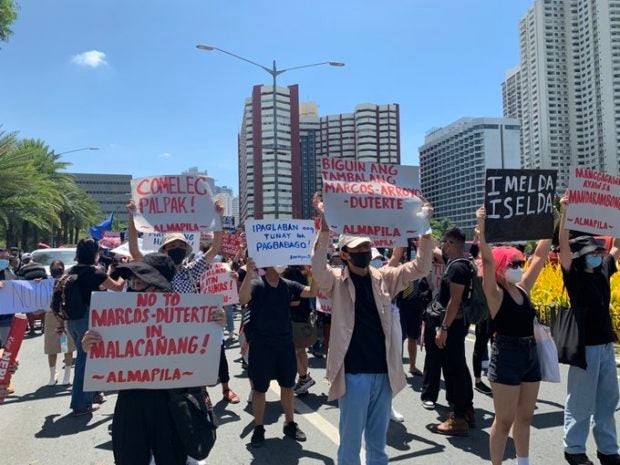 Groups launches on May 13, 2022, their “Black Friday protest” as they condemned alleged irregularities in the May 9 national and local elections. INQUIRER.net/John Eric Mendoza

MANILA, Philippines — Groups have launched their “Black Friday protest” as they condemned alleged irregularities in the May 9 national and local elections.

Hundreds of protesters were supposed to stage their demonstration in front of the Philippine International Convention Center (PICC) in Pasay City where the Commission on Elections (Comelec), sitting as the National Board of Canvassers, was conducting its operations.

But some of the 1,500 police officers deployed in the vicinity barricaded the roads leading to the PICC, preventing protesters from realizing their plans.

The rallyists, who included activists who camped out at the Liwasang Bonifacio grounds in Manila since May 10, instead held their protest at Bukaneg Street near the Cultural Center of the Philippines Complex.

LOOK: Militant groups stage a demonstration at Bukaneg street near CCP in Pasay City to decry the alleged irregularities in the electoral process and oppose the victory of presumptive Pres. Bongbong Marcos. @inquirerdotnet pic.twitter.com/1L5hYO0Pwm

By early Friday afternoon, protesters started to leave the area as they proceeded to the thanksgiving event of Vice President Leni Robredo in Quezon City.

Among the attendees of the Black Friday protest was former Bayan Muna Rep. Neri Colmenares, who told reporters that “never before in any electoral history has this electoral mass movement happened, and that’s a major victory for the Filipino people.”

Colmenares also said this year’s election was the “most absurdly fast elections” in the country.

The latest partial and unofficial count of the Parish Pastoral Council for Responsible Voting showed that the tandem of Ferdinand “Bongbong” Marcos Jr. and Sara Duterte-Carpio were headed for a big win in the presidential and vice-presidential races, respectively.

Marcos and Duterte-Carpio have so far obtained more than 31 million votes each.