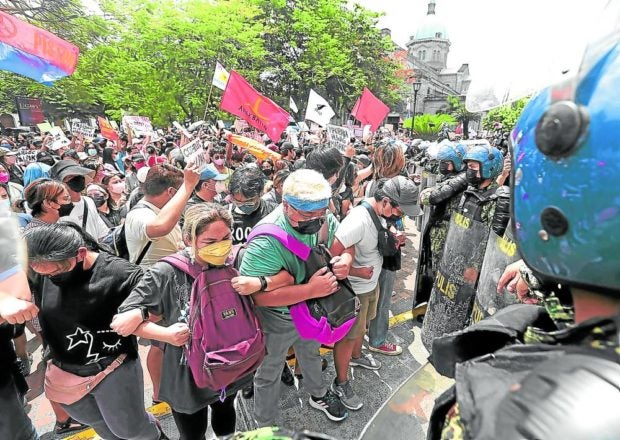 MANILA, Philippines — Hundreds of protesters, including activists and youth groups, trooped to the Commission on Elections (Comelec) main office in Intramuros, Manila, on Tuesday morning to slam and question the result of the just-concluded elections, and to oppose the looming victory of Ferdinand “Bongbong” Marcos Jr. in the presidential race.

Among the groups that participated in the rally were Kontra Daya, Kabataan, Karapatan, Bayan and Kilusang Mayo Uno.

According to Danilo Arao of Kontra Daya, the integrity of the count is questionable as he cited the various cases of alleged fraud and irregularities that marred the electoral exercise.

“Comelec should make an accounting of all its transgressions, and answer decisively why, for example, it refused to extend voting hours though the long lines and delays are not the voters’ fault,” he told the Inquirer.

Arao said they’re consulting their lawyers on what steps they could take next.

The group Campaign Against the Return of the Marcoses and Martial Law (Carmma) also reaffirmed its strong stand against the prospect of another Marcos in Malacañang.

“A possible win based on a campaign built on blatant lies, historical distortions and mass deception is tantamount to cheating your way to victory—and this is not acceptable,” it said in a statement.

The protesters, who later marched from Intramuros to Liwasang Bonifacio, were chanting against martial law and the names of Vice President Leni Robredo, the son of the late dictator’s staunch rival, and her running mate Sen. Francis Pangilinan, who was also losing to Marcos’ running mate, Davao City Mayor Sara Duterte, in the vice presidential race based on partial, unofficial tally of votes cast on Monday.

Some voters also claimed they were asked to leave their ballots at the precincts due to defective VCMs. Some suspected this as a means to cheat.

As protests against election results mount up, the Philippine National Police has called on the public to keep their cool, urging supporters of candidates to “calm down“ and “respect the result of the elections.”

Police Lt. Gen. Vicente Danao Jr., officer in charge of the PNP, told reporters on Tuesday that police officers would implement maximum tolerance, and they would not stop the people from practicing their right to freedom of expression.

Danao said the PNP respects the right of the people to air their grievances, as long as they would not resort to violence.

In Baguio City, about 200 youths, lawyers, and martial law victims picketed the summer compound of the Comelec to denounce what they called a “brazen electoral fraud,” which allegedly benefited Marcos and his running mate Duterte.

“We are not being bitter. We are asserting what is right,” said Linda Gubrin, a martial law survivor and one of the convenors of Baguio’s Robredo People’s Council.

‘A fight for our past’

Social science lecturer Reuel Caricativo of the University of the Philippines Baguio said the results of the elections have been painful for teachers like him who were tasked to educate the new generation about the 20-year atrocities committed under Marcos rule.

“Remember, this is a fight not just for our future, but for our past. It would seem that with the results of the elections, most Filipinos have chosen not to reckon with the dark chapters of our history. We should not allow this,” he said.

In Angeles City, more than 100 students from various colleges marched for three kilometers to express their objections to a Marcos presidency.

From the tearful and solemn gatherings on Monday night in Naga City and in Legazpi City in Albay, the supporters of Robredo on Tuesday transformed their calls from prayers for divine intervention against cheating at the polls to one of protest action against the alleged irregularities in the partial and unofficial vote count where she was shown losing by a landslide to Marcos.

In a rally organized by Jovenes Anakbayan, around 500 young participants, most of them first-time voters, gathered at Plaza Rizal in the home city of Robredo at 3 p.m. to protest against the impending win of Marcos and running mate Duterte.

“We demand that the anomalies in the elections be exposed,” said Khryss Arañas, chairperson of Jovenes Anakbayan Naga City.

Arañas claimed they believed there was “electoral sabotage and fraud” over the speed with which the results were released by the Comelec despite widespread reports of malfunctioning vote counting machines that delayed the casting of votes in numerous precincts.

In Legazpi City, over 500 people also gathered at the Peñaranda Park to light candles and pray.

“Again, I am grateful for the diligence, the creativity, and the heart that our ranks brought to the campaign. Because of you, we have seen a glimpse of what kind of society we can attain,” Robredo said in her statement.

Robredo said she would be in Metro Manila on May 13 to thank her supporters.