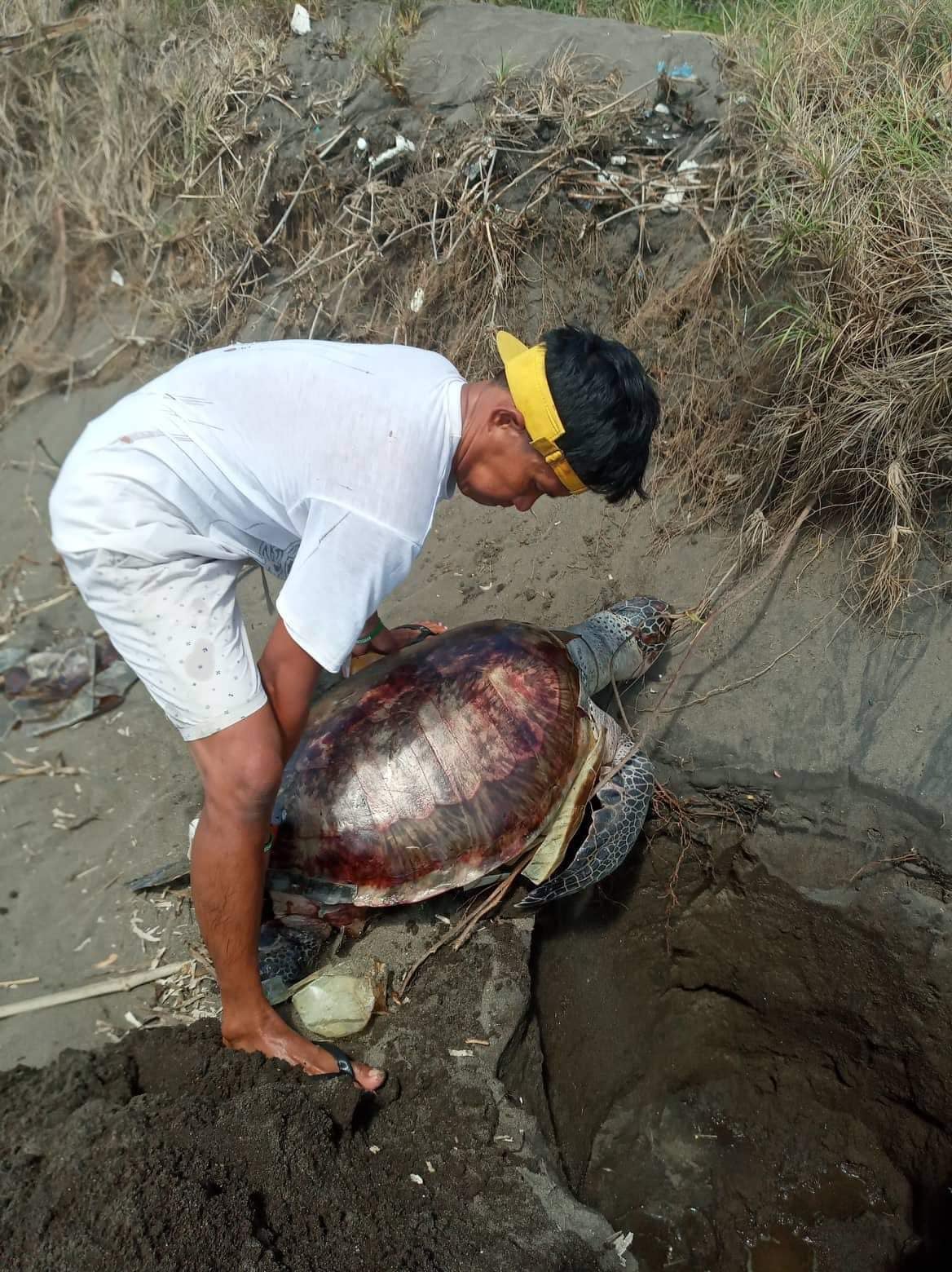 A fisherman in Sariaya, Quezon, is set to bury the dead female green sea turtle on the shore of Tayabas Bay | PHOTO: Tanggol Kalikasan

LUCENA CITY––The environmental group Tanggol Kalikasan has called on the government authorities to investigate the killing of a green sea turtle (Chelonia mydas), locally known as “pawikan,” which was found dead on Wednesday, May 11, along the shore of Tayabas Bay in Sariaya, Quezon.

“The concerned government agencies should not let this revolting incident just pass without any effort to look for the culprits,” Jay Lim, project officer of Tanggol Kalikasan (TK) said in an interview Friday in this city.

TK is a public interest law office based in Lucena that advocates environmental protection. The group has long been conducting an information campaign to help educate the public on existing laws on environmental and wildlife protection.

Lim reported that the sea turtle had a 30-inch-long and 20-inch-wide curved carapace and weighed 60 kilos. It was found dead at 6 p.m. on Wednesday along the shore in Barangay Bignay 2.

Citing the report of Edwin Fria, chief fish warden in the village, Lim said the female marine turtle was caught in a net, and a piece of the net was entangled around her neck.

“She bore signs of having been whacked, which probably caused her death,” Lim said.

The sea turtle was buried on the shore of the bay.

The International Union for Conservation of Nature and Natural Resources listed the green sea turtle as “endangered (facing a very high risk of extinction in the wild).”

Green sea turtles have an average lifespan of up to 80 years, can grow up to five feet long, and weigh more than 300 kilos.

Lim said there were numerous “baklad” (huge stationary fish traps) sunk into the bottom of Tayabas Bay that posed a danger to these marine creatures.

Lim appealed to fishermen not to harm the turtles since they are their allies in making a living.

He explained that marine reptiles in a fishing area indicate a balanced marine ecosystem and an abundant fish supply.

Lim lamented that the dead turtle could have been one of the marine species laying their eggs in the area every year.

The Sariaya coastline serves as a sanctuary for turtles that usually come to lay and hatch their eggs from October to December.

The hatchlings of different sea turtle species were cared for by fishermen, fish wardens, and the local government in five nesting sites in the villages of Castañas, San Roque, Guisguis, Bignay 1, and Bignay 2.