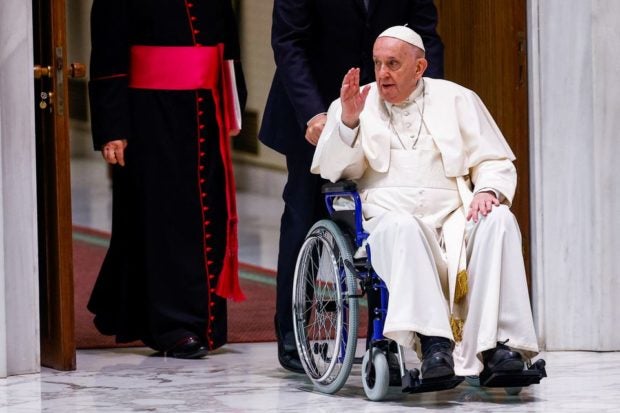 Pope Francis arrives on a wheelchair to meet with participants in the plenary assembly of the International Union of Superiors General (IUSG) at the Vatican, May 5, 2022. REUTERS

VATICAN CITY — Pope Francis is “not going to stop,” despite recent health problems that have forced him to use a wheelchair, a cardinal said on Tuesday.

Cardinal Kevin Farrell, an Irish-American Vatican official, made the comment while presenting the pope’s message for the Roman Catholic Church’s World Day for Grandparents and the Elderly, celebrated this year on June 24.

Francis established the day in 2021 to bring attention to the needs of the elderly and underscore their potential as active members of society who should not be discarded.

“He accepts his limitations at this moment with a great spirit and a great heart. I think he is an example to all of us. We should not hide the fact that with age comes a lessening of our ability to play an active part in the life of the world today,” Farrell said.

“But he shows us also that with the limitations that he has physically and with age, he’s not going to stop,” he said.

The pope, 85, has suffered a flare-up of pain in the right knee in addition to a long-time case of sciatica, which also causes pain in the legs.

Last Thursday, he used a wheelchair in public for the first time and has used one since during private and public audiences.

Farrell said Francis was a great example to elderly people because he has decided to carry on with duties as best as possible despite “the limitation of being in these days in a wheelchair because of his knee”.

In his message, the pope said the elderly were not understood and too often younger generations want to put them out of sight.

“Many people are afraid of old age. They consider it a sort of disease with which any contact is best avoided,” the pope said, calling the attitude the result of a “throw-away’ culture”.

Francis’ health has forced the postponement of a trip to Lebanon next month but he is still due to make two trips in July, one to South Sudan and the Democratic Republic of Congo and the other to Canada.