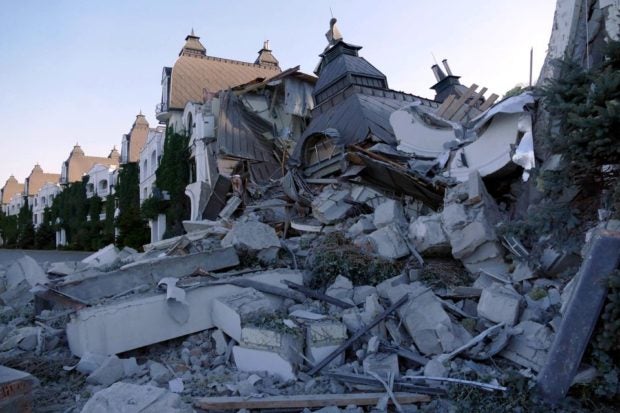 A hotel complex destroyed by a Russian missile during Russia’s invasion of Ukraine is pictured in Odesa, Ukraine, May 8, 2022. REUTERS/Igor Tkachenko

KYIV, Ukraine—Here are the latest developments in the war in Ukraine:

Russian President Vladimir Putin will not end the Ukraine war with the campaign in the eastern Donbas region, says US Director of National Intelligence Avril Haines, warning he could make a play for the breakaway region of Transnistria in Ukraine’s neighbour to the west, Moldova.

“We assess President Putin is preparing for prolonged conflict in Ukraine during which he still intends to achieve goals beyond the Donbas,” Haines tells a Senate hearing.

She also says Putin could order martial law in Russia to support his ambitions in Ukraine but will use nuclear weapons only if he considers Russia faces an “existential threat”.

‘Over 1,000’ fighters holding out in Mariupol

Ukraine says “more than 1,000” fighters are still holding out at the Azovstal steelworks in the southeastern city of Mariupol, the last pocket of resistance to Russian control in the ruined port.

Deputy Prime Minister Iryna Vereshchuk denies reports that around 100 civilians are still in the steel mill, but says “hundreds” of fighters are wounded and require “urgent evacuation”.

Russian forces have besieged the plant but the fighters have refused to surrender.

At the weekend, Ukraine said all the women, children and elderly people that had been sheltering at the plant had been evacuated.

Rescuers find the bodies of 44 civilians under the rubble of a destroyed building in the eastern Ukrainian town of Izyum, now under Russian control, the regional governor in Kharkiv says.

His counterpart in Donetsk said three civilians were killed in the region.

France, which holds the rotating presidency of the EU, says Hungary could agree to an EU-wide embargo on Russian oil as early as “this week”.

Landlocked Hungary, a Moscow ally that relies on Russian oil, has been holding up the embargo, saying it needs more time to find new energy sources.

“I think we could have a deal this week, we’re working hard to achieve that,” France’s European affairs minister Clement Beaune told France’s LCI broadcaster.

Ukraine’s foreign minister Dmytro Kuleba says his country’s EU membership bid is a question of “war and peace” for Europe.

He is speaking a day after French President Emmanuel Macron appeared to rule out Ukraine joining the European Union in the near future.

Macron says joining the bloc would take “decades” and suggests instead that Ukraine and other EU hopefuls like Moldova and Georgia be integrated into a new, yet-to-be-created “European political community”.

The EU says it will give an opinion on Ukraine’s accession bid next month.

German Foreign Minister Annalena Baerbock makes a surprise visit to the Kyiv suburb of Bucha, where Russian forces are accused of massacring civilians before withdrawing from the region in late March.

Baerbock is the highest-ranking German official to visit Ukraine since the Russian invasion.

Ukraine’s foreign minister says Kyiv is grateful to Berlin for reviewing its policy of appeasement towards Moscow, and for backing a Russian oil embargo and agreeing to send heavy weapons to Ukraine.

Western powers accuse Russian authorities of carrying out a cyberattack against a satellite network an hour before the invasion of Ukraine on February 24 to pave the way for its assault.

According to the British Foreign Office, UK, US and EU cybersecurity experts have met to assess new intelligence linking the February attack directly to the Russian state.