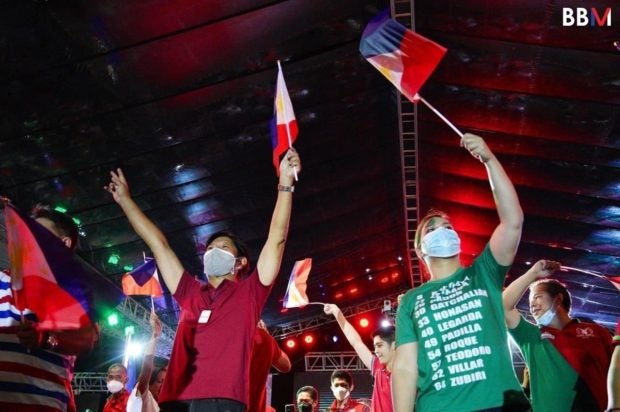 MANILA, Philippines — The government under the leadership of presumptive president Ferdinand Marcos Jr. and vice president Davao City Mayor Sara Duterte-Carpio will be a “new era of unity,” the latter’s spokesperson said on Wednesday.

This is because both leaders would be working together and not as opponents, Duterte-Carpio spokesperson and Liloan Mayor Christina Frasco said.

“I believe what we can expect in the next 6 years is a new era of unity where the President and the Vice President are going to be working in harmony as that has been their message all along where each brings their strengths to the table to ensure that our country is able to recover and respond well to all of the challenges that it still currently faces as we are still under a pandemic,” she said in an interview over ABS CBN News Channel.

The Marcos-Duterte tandem currently enjoys overwhelming vote leads over their opponents, with both of them getting 31 million votes.

This is according to the Commission on Elections’ (Comelec) transparency server reflecting 98.24% of election returns.

Frasco said Duterte-Carpio can contribute her “very, very strong and vast executive experience” having been Davao City mayor from 2010 to 2013 and 2016 to 2022.

Duterte-Carpio is “very well versed as far as all aspects of local government is concerned,” said Frasco, daughter of Cebu Gov. Gwen Garcia whose endorsement of the tandem claimed to have delivered majority of votes in the country’s most vote-rich province.

Apart from that, Duterte-Carpio would be able to give practical experience and advice “as far as ensuring the territorial integrity” of the country’s border having been a local executive chief, Frasco said.

“She would also be able to ensure that the local government would have a very good working relationship with the national government that would bode well for our respective constituencies,” she added.

Frasco also said that Duterte-Carpio, while she stands firm in her decisions and values her independence, has worked “very well” with Marcos.

“What we foresee is a very good working relationship that is based on a common and united principle of governance and that is unity and love of country,” she said.