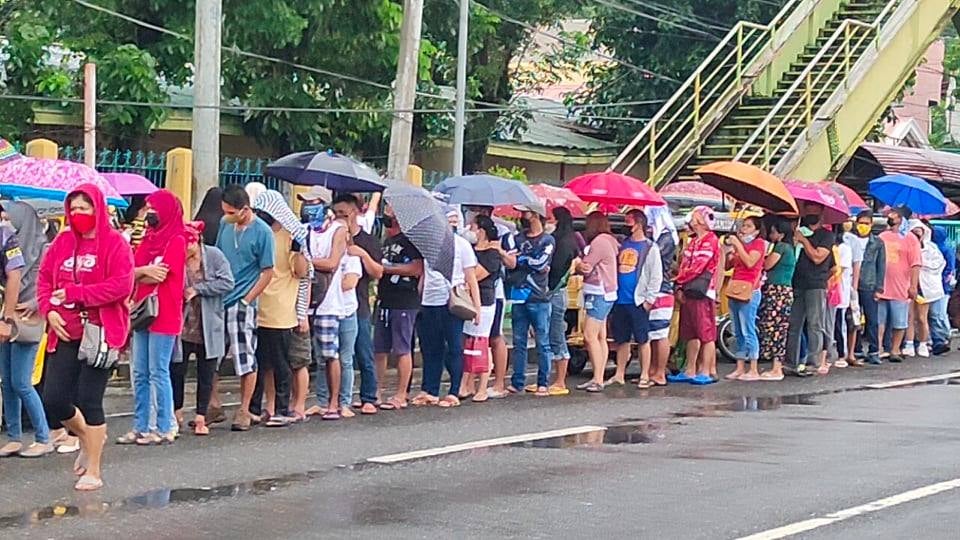 EARLY BIRDS. Protected by umbrellas, voters in Barangay Zone 1 in Digos City, Davao del Sur, braved a drizzle to line for ballots. There was almost a kilometer-long line of people on Monday morning outside the village’s elementary school. ELDIE S. AGUIRRE

The heavy downpour that started Sunday night and lasted through Monday morning in Davao de Oro province resulted in a landslide in Ngan, Compostela town that killed one person.

Ronelia Magnaos, 58, was inside the house that submerged during the landslide, causing her death, said Allen Baco of the Municipal Disaster Risk Reduction and Management Office.

Thirty families were also affected by flooding, which delayed their casting of votes.

In Lupon town, Davao Oriental, 50 people were temporarily stranded in the village of Macangao, but the water level eventually subsided, finally allowing them to vote.

Col. Efren Orlina, director of the Davao Oriental provincial police office, said the landslides caused some delays in the voting of residents, but local officials immediately came to their aid so they were able to vote.

Some areas also experienced brownouts due to falling trees, but power was already restored, he added.

Orlina also noted that although people were early in going to their voting places, wearing their face masks and going through thermal scanners, physical distancing was no longer observed properly.

On Dinagat Islands, residents had to contend with rains as they trooped to the polling centers early morning of election day. As the rain poured heavily, they were forced to wait under a makeshift tent for their turn to be called into the voting center. Voters got wet as the structure did not have walls.

A man queuing at the Paniog Elementary School on the island village of Cortez in Basilisa town of the province, complained that he had to go home three times to change clothes before he was finally able to vote. The rains persisted until the afternoon.

In Digos City, Davao del Sur, the rain did not dampen the zeal of voters to line up to vote for their candidates. A kilometer-long line of people waited for a chance to vote in Barangay Zone 1 amid the rain early Monday morning. People protected themselves with umbrellas.

Rains also greeted the opening of polling precincts in neighboring Davao Occidental. In Malita town, residents had to secure their belongings first in anticipation of floods before going to the polling precincts.