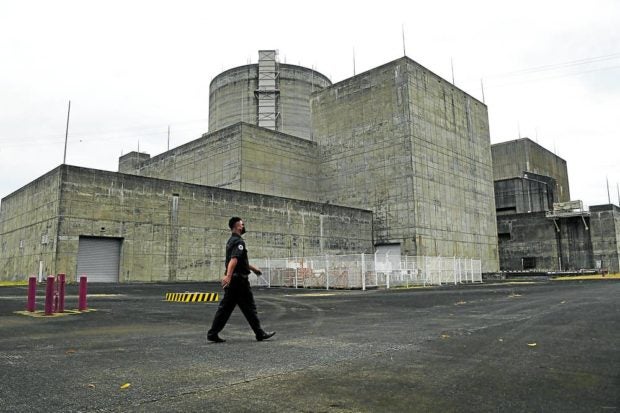 ‘MUSEUM’ NO MORE? Photo taken on April 5 shows a security guard walking in front of the main gate of the Bataan Nuclear Power Plant in the town of Morong, Bataan province. —AFP

MORONG—A mothballed nuclear power plant built near a fault line and volcanoes in the Philippines during Ferdinand Marcos’ dictatorship could be revived if his son wins next week’s presidential election.

The $2.2-billion Bataan plant became a monument to the greed and graft of the Marcos era, and was left dormant after the dictator was toppled in 1986.Even before the Chernobyl nuclear accident that year sealed its fate, there were concerns about Bataan’s design and location.

The plant sits on the coast 18 meters (59 feet) above sea level and near several volcanoes in a part of the Philippines regularly shaken by earthquakes.

Yet Ferdinand Marcos Jr. has vowed to speed up the adoption of nuclear power if he is elected and has left open the possibility of resuscitating his father’s failed venture.

“We really have to look at nuclear power,” Marcos Jr. said in March, insisting at least one plant was needed to cut exorbitant electricity prices in the country.

Marcos Jr., also a fan of wind, solar and geothermal technology, said a South Korean proposal to rehabilitate the Bataan plant should be revisited.

Studies by South Korean and Russian experts showed it was possible to get the 620-megawatt plant working again, Energy Secretary Alfonso Cusi told a Senate hearing in 2020.

But upgrading an aging facility fitted with outdated analog technology could take at least four years and cost another $1 billion.

Eighty kilometers (50 miles) west of Manila, the concrete plant is surrounded by a security fence on a peninsula overlooking the South China Sea.

The Philippines is a geologically volatile country and the land near the plant is vulnerable to seismic activity. Mt. Pinatubo, a volcano 57 km north of the plant that was thought to be dormant, exploded in 1991, killing 300 people.

Seismologists say the Natib and Mariveles volcanoes nearby are “potentially active.”

Built in response to rising energy demands and the global oil price shocks of the 1970s, the Bataan plant has never produced a single watt of power.

Instead of producing electricity, the relic serves as a destination for tourists and students—part of the state-owned National Power Corp.’s efforts to educate the public about nuclear power.

Visitors are taken up flights of metal stairs and through submarine-like passages to peer over the dormant reactor and fuel rods still wrapped in plastic packaging. In the stuffy control room—cost-cutting means air conditioners in the plant stay off—maintenance worker Rizly Seril, 65, wipes dust off wooden desks.

For many, though, the Westinghouse-designed plant is a bitter reminder of the corruption and debt-fueled infrastructure spending during the Marcos years that later impoverished the country.

The original price tag of around $500 million ballooned to about $2.2 billion. Much of the inflated balance was allegedly stolen by the dictator and his cronies.

The last installment on the debt—one of the biggest ever on the country’s books—was paid in 2007.

Construction on the problem-plagued plant finished before Marcos was ousted, but he never started it up.

Its fate was sealed after the clan was chased into US exile and global fears over nuclear energy spiked following the Chernobyl disaster.

The new government refused to activate it, and uranium fuel trucked to the plant was sold in 1997 at a $35-million loss.

Since then, the budget to maintain it has been slashed by more than half, said plant manager Dante Caraos.

“We are spending very little,” Caraos told Agence France-Presse (AFP) in his office, a stone’s throw from the hulking structure. “We are focusing on some priority projects like repair of the roofs, the maintenance of the grounds.”

The Philippines—regularly affected by electricity outages—relies on largely imported carbon-belching coal for more than half of its power generation.

Supporters of nuclear power say the technology offers a cleaner option to help meet demand. But critics argue that renewable sources, such as wind and solar, are cheaper and safer to produce in a country hit by earthquakes, typhoons and volcanic eruptions.

“If you add the effects of climate change, it’s going to be a big concern for local communities,” said Roland Simbulan, an antinuclear power activist.

Ideas to convert the plant into a coal or natural-gas facility were discarded long ago.

Ronald Mendoza, dean of Manila’s Ateneo School of Government, said it would be cheaper to build a new plant and turn Bataan into the “biggest museum of corruption in Asia” to serve as a reminder of past mistakes.

Joe Manalo, head of preservation and maintenance at the Bataan plant, is skeptical about it ever producing power.

“It depends on the government and the new president,” Manalo said. “To see is to believe.”