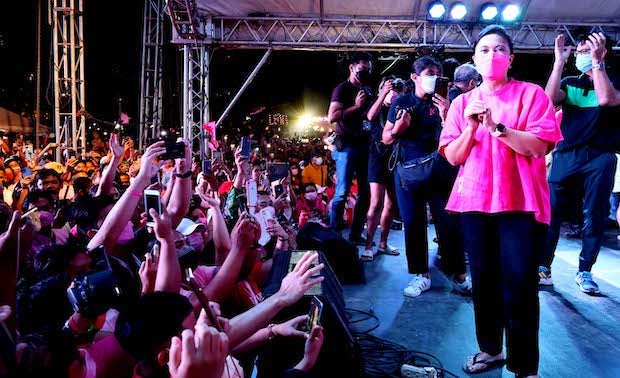 Vice President Leni Robredo decided to wear slippers, like almost everyone else, during her campaign on Baybay Boulevard in Borongan City, Eastern Samar on Tuesday, March 29, 2022. (VP Leni Media Bureau)

BORONGAN CITY, Eastern Samar—For the first time, priests in the Diocese of Borongan are taking a political stand.

Seventy priests of 76 priests in the diocese signed a statement endorsing the candidacy of Vice President Leni Robredo and her running mate, Sen. Francis “Kiko” Pangilinan.

In the statement, they said that after prayerful discernment, they were adding their voice to the ever-growing collective support for the candidacy of Robredo and Pangilinan.

The clergy believed that the Leni-Kiko tandem best exemplifies the qualities of servant-leaders the country desperately needs today. “The tandem embodies the new kind of politics that truly listens to and empowers people for the common good in ways that benefit the poor and the marginalized,” the statement said.

It also cited the pastoral letter read in all churches throughout the province last week, where Bishop Crispin B. Varquez said that Christians should stop dismissing politics as a dirty exercise and urged the people to be actively involved in it because it is a lofty vocation and one of the highest forms of charity in as much as it seeks the common good.

“The lay faithful must directly involve themselves in partisan politics according to the values of the gospel as taught by the church,” the Prelate said.

“We must overcome indifference and non-involvement. Our children and the next generations may suffer the consequences of our refusal to act now,” he added.