newsinfo / Headlines
Headlines
‘Two outstanding candidates are on the ballot’ 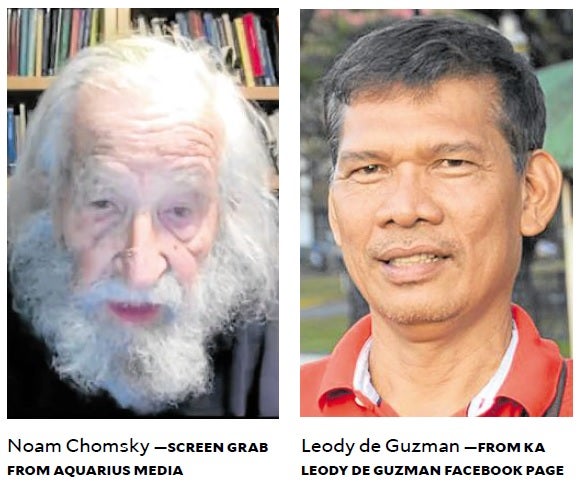 “Ka Leody de Guzman has long been engaged in very impressive struggles, especially for the rights of working people, and along with Walden in the leadership of public movements that seek to defend and expand peace and justice in opposition to the neoliberal assault against the population, actually a form of cruel, one-side war which has had devastating effects worldwide,” Chomsky said of the Partido Lakas ng Masa (PLM) candidate, in a video message released by the PLM on Tuesday.

Chomsky, 93, currently a professor of linguistics at the University of Arizona, said he knew Bello personally and lauded the former lawmaker for his “stellar record in activism and scholarship, always on the front lines of struggles for peace and freedom in the Philippines and worldwide.”

“I’ve personally learned a great deal from his work which has also been a constant source of inspiration for engagement and activism. It’s been my great privilege to have been able to join him in some of his efforts,” he added.

Chomsky said the PLM candidates’ program of democratic socialism “offers a way for the Philippines to escape from the bitter cycle of the past and to take its proper place in leading Asia forward, towards the role it can and should play in creating a much better world for the Philippines, and for all of us.”

“The people of the Philippines have borne more than their share of suffering, brutality, corruption. There have been repeated uprisings, providing hope for progress, crushed by violence and oppression. None of this is inevitable. Right now, there is a real opportunity to escape from this grim history. The upcoming elections offer a real choice: two outstanding candidates are on the ballot. They have programs designed to cure the ills of the current society and to offer a path for a far better future,’” he said, referring to De Guzman and Bello.

The bestselling author of more than a hundred influential political books, Chomsky is also regarded as the father of modern linguistics and one of the founders of the field of cognitive science.

Ka Leody, Walden Bello to hold miting de avance in QC on May 4