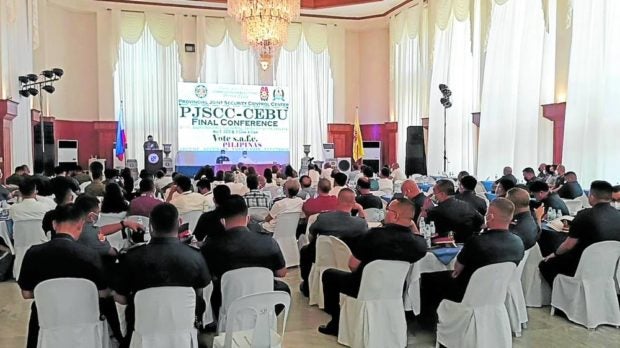 PREPARATION | Local and police officials gather at Cebu provincial capitol on Monday to map out security plans for the May 9 elections. (Photo by DALE G. ISRAEL / Inquirer Visayas)

CEBU CITY, Cebu, Philippines — At least seven areas in Cebu province were classified as “areas of concern” by the Commission on Elections (Comelec) due to intense political rivalries in past elections.

“We are looking into minimal areas of concern which we could not consider as hot spots. I hope there will be no violence in these areas. I hope the Comelec will be able to prevent any untoward incidents in relation to the elections,” Brillantes said.

Col. Engelbert Soriano, director of the Cebu police, said around 400 policemen would be assigned in different parts of the province to help ensure a peaceful election.

He said he wanted at least two policemen to secure the surroundings of every polling center in Cebu.

In Cebu City, election officer Edwin Cadungog said they would wait for the result of the police investigation on the shooting of a police officer and his wife, a nominee of a party list group, to determine if the incident was election-related.

Cadungog said the incident might be “isolated” and residents had nothing to worry about as the city remained “very peaceful.”

On Sunday night, Lt. Col. Chuck Barandog, former chief of the Cebu City Mobile Force Company and who is currently assigned in Camp Crame, and his wife, Yvonne, the first nominee of the STL party list group and a former chair of Barangay Calamba in this city, were shot and wounded by two men on a motorcycle.

Barandog, who had 11 bullet wounds, remained in critical condition at Perpetual Succour Hospital in Cebu City, while his wife was hit in the left rib area and was already in stable condition.

“Our investigators are looking at all angles of the case, including the couple’s personal affairs, politics, business and work,” Macatangay said in an interview.

She said Barandog could be the target, noting that people that he had arrested for their involvement in illegal drugs and gambling could be behind the attack.

Barandog was driving a white Toyota Hilux bearing the logo of STL party list when two gunmen fired at the driver’s seat as the vehicle reached near the intersection of Pope John Paul II Avenue in Barangay Mabolo here at past 10 p.m. Sunday.

Their police escort, Police Staff Sgt. Estipen Padillo, who was seated at the back, was unhurt but failed to return fire. Macatangay said investigators so far had Padillo as the only witness.

Police monitoring 9 LGUs in Cebu for May 9 polls