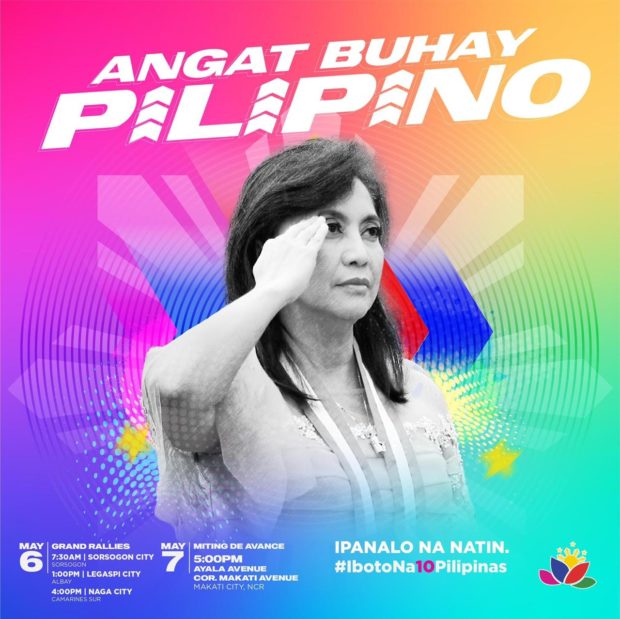 MANILA, Philippines — Vice President Leni Robredo and Senator Francis “Kiko” Pangilinan were set to conclude their three-month nationwide campaign to become the next president and vice president, respectively, via a miting de avance in Naga City on May 6 and Makati City on May 7.

Miting de avance is an event that commonly marks the closing of the poll campaign season.

(At the conclusion of our campaign, a pink-colored future will officially begin for the Philippines!)

Prior to the miting de avance in Naga City at 4 p.m. on Friday, grand rallies have been scheduled to take place in Sorsogon City from 7:30 a.m. and in Legazpi City, Albay, from 1 p.m. also on May 6.

(All colors are invited because Honest Government is for all Filipinos! Let us win this!)

The people’s rallies of Robredo and Pangilinan are known to break records with attendance reaching way more than 100,000, according to estimates of organizers and local police.

The Pulse Asia survey conducted from April 16 to 21 and released to the public on Monday, May 2, however, showed Robredo still trailing Ferdinand Marcos Jr. despite the mammoth crowds in the majority of the Leni0Kiko tandem rallies.

Of the 2,400 adult respondents, 56 percent picked Marcos while 23 percent chose Robredo as the country’s next president if elections were held during the survey period.

Read Next
UK army investigating ‘fake priest’ breach near queen’s castle
EDITORS' PICK
Geek out at TOYCON 2022 powered by Smart Signature
UK’s Boris Johnson will resign, BBC reports
High inflation: Your P1 is now worth only 87 centavos
High-risk pregnancy: Reducing your risk is in your hands
Unemployment rate up to 6% in May
House energy committee chair Arroyo bats for cheap electricity
MOST READ
Suspect in grisly killing of missing woman in Bulacan arrested
Kim Atienza’s daughter flaunts bikini body in response to critics of her ‘revealing photos’
Cop slain in Isabela ambush
FDA probes popular Filipino noodle brand for ‘high level of ethylene oxide’
Don't miss out on the latest news and information.