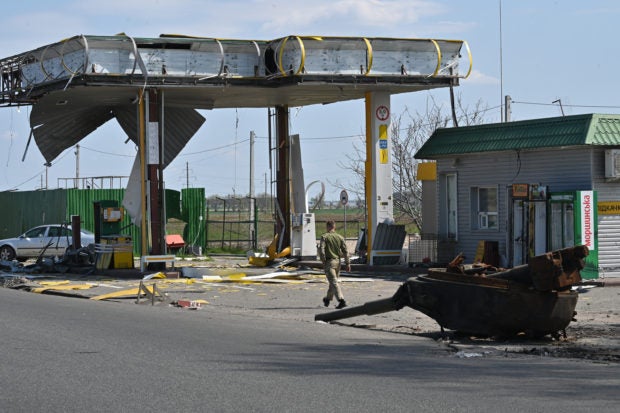 Ukrainian serviceman walks past the turret of a Russian tank next to a destroyed petrol station in the village of Skybyn, northeast of Kyiv on May 2, 2022. AFP

Israeli Foreign Minister Yair Lapid slams his Russian counterpart Sergei Lavrov for alleging Adolf Hitler may have “had Jewish blood” in a bid to discredit Kyiv.

Lavrov’s comments — which invoked a conspiracy theory exploiting a gap in the dictator’s ancestry — see Israel summon Moscow’s ambassador for “clarifications” and condemn the “unforgivable and outrageous statement”.

The European Commission is set to propose a new package of measures, including an embargo on Russian oil, officials say.

The anti-Russian measures will also target the country’s largest bank, Sberbank, which will be excluded from the global banking communications system SWIFT, diplomats said.

UK Prime Minister Boris Johnson will deliver an address to Ukraine’s parliament — the first by a foreign leader since Russia invaded on February 24 — where he is set to hail the country’s resistance as its “finest hour”.

He will also announce another 300 million pounds ($376 million, 358 million euros) in military aid for Kyiv, his office says.

Russia is planning imminently to “annex” the two eastern regions of Ukraine battered by its invasion after failing to overthrow the government in Kyiv, a senior US official says.

A 15-year-old boy is killed in a fresh Russian strike on Ukraine’s Black Sea port of Odessa, the southern city’s council says.

A missile hit a residential building that had five people inside, said the statement, adding that a girl had been hospitalised.

The European Union warns member states to prepare for a possible complete breakdown in gas supplies from Russia, insisting it will not cede to Moscow’s demand that imports be paid for in rubles.

The European Commission will on Tuesday propose to member states a new package of sanctions to punish the Kremlin for its invasion of Ukraine, including an embargo on Russian oil, officials say.

Russia’s top general, Valery Gerasimov, visited the Donbas front in the Ukraine war last week, a Pentagon official says, but reports that he was injured in a Ukrainian attack could not be confirmed.

Russian clubs have been banned by UEFA from participating in the Champions League and all other European competitions next season, European football’s governing body announces.

Around 100 evacuated from steel plant

An initial group of around 100 civilians has been evacuated from the besieged Azovstal steel plant in the southern port city of Mariupol, Ukrainian President Volodymyr Zelensky says.

Moscow says some civilians were handed over to the United Nations and the Red Cross.

Russia’s Bolshoi Theatre announces it is cancelling the performances directed by Kirill Serebrennikov and Timofey Kulyabin, who have both spoken out against Moscow’s military campaign in Ukraine.

“The war in Ukraine has worsened the risks for the project,” Fennovoima says in a statement, also citing “significant delays”.