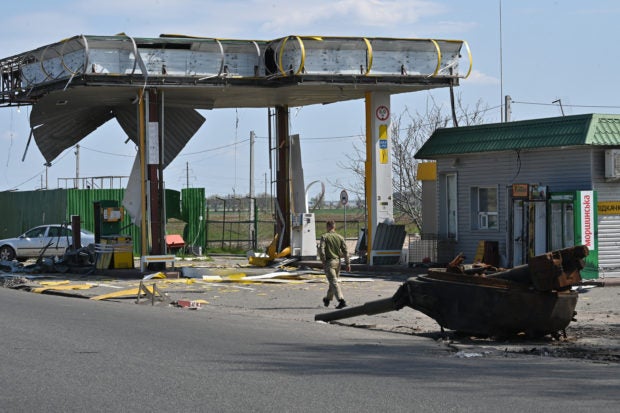 Ukrainian serviceman walks past the turret of a Russian tank next to a destroyed petrol station in the village of Skybyn, northeast of Kyiv on May 2, 2022. – AFP

SKYBYN, Ukraine—The turret from a rusted tank marking Russia’s closest advance towards northeastern Kyiv lies next to a destroyed petrol station that reveals the pain of Ukraine’s mounting fuel problems.

The once-mighty tank was one of dozens in a column ambushed by the outgunned Ukrainian forces at the peak of the March battle for Kyiv.

The fuel pumps’ mangled remains hint at the sweeping social and economic problems haunting Ukraine in the third month of the grinding Russian invasion.

“The most important thing is that the Russian army is not here,” the 53-year-old said after examining the tanks’ mangled hulk splitting the main road running through the village of Skybyn outside Kyiv.

“The wait for fuel can now last an hour. But I am ready to wait two hours to make sure nothing like this happens again.”

The force of the blast that blew up the Russian tank — almost certainly killing everyone inside instantly — propelled the turret and its big gun across one side of the four-lane highway.

The Russian army has regrouped and is pressing on with its campaign along Ukraine’s eastern and southern flanks.

The human suffering in the war zone is growing by the hour.

But snaking queues of cars that returned to many Ukrainian roads last week showcase the success of Russia’s seeming effort to inflict as much pain on its western neighbour as possible.

The same queues appeared in the first panicked days after Russia’s February 24 invasion.

They subsided as Ukrainians began to cope with life in wartime.

Many patiently waiting for fuel across the revitalised street of central Kyiv now struggle to understand why the fuel problems are returning.

“Some say there won’t be any more fuel coming to Ukraine at all,” taxi driver Sergiy Kavun said after pulling up to the end of a queue stretching down the curb of a central highway.

“I tried four petrol stations before finding this one. At least a quarter of my day’s income is already gone. I might have to switch professions,” said the 30-year-old.

Limited official information has spun a long thread of theories about why Ukraine’s pumps are running dry.

Some point to Russia’s ability to destroy many of Ukraine’s fuel storage facilities with long-range missiles.

This means huge cisterns that once ferried fuel before pouring it into storage silos have been replaced with much smaller trucks that offload it directly at the petrol station.

The amount of available fuel at any one time has thus shrunk exponentially.

Others believe that much of the diesel is being redirected to the war effort and farmers during the crucial spring planting and growing season.

The problems in Kyiv itself appear unique.

The city’s population of three million — abandoned by at least half the residents in the first weeks of war — is swelling again with returnees and those fleeing the second wave of the Russian offensive.

Demand is growing while supply is shrinking because fuel deliveries by road from Russia and Belarus have long stopped.

“They say they might be soon delivering some from Lithuania and Poland,” said the taxi driver. “They say this is only temporary. We all hope so.”

The idea that much of the missing fuel is going to help the army is striking a patriotic nerve.

“We can walk, that’s not a problem at all. Everything must go to the army — fuel, everything,” pensioner Oleksandr Voznyakovskiy said after nudging his little car a few metres closer to the petrol stations.

“We can suffer a bit. We’ll manage. I can drive less. Anything, as long as we win.”

But 19-year-old army recruit Kozachyok — a nom de guerre that translates roughly as “the little Cossack” — had mixed feelings while inspecting what was left of the Russian tank destroyed in the March battle.

“We use the same kind of tanks. Just one spark and that’s it – everyone inside is finished,” he said darkly.

“I could have been sitting in that tank. I can visualise how it all happened.”