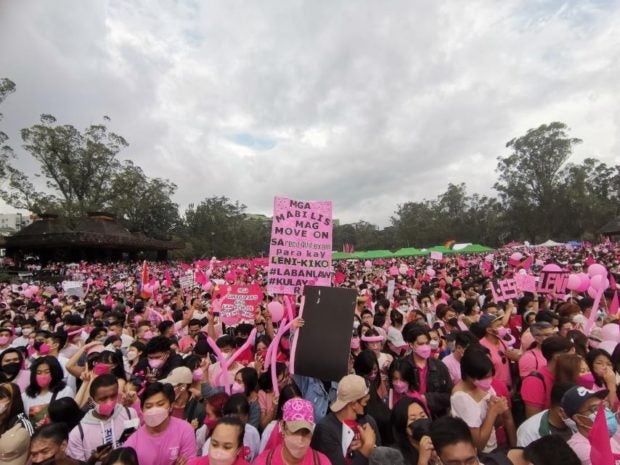 Stressing that the upcoming election was “the fight of our collective lives,” St. Louis University president Fr. Gilbert Sales; University of the Cordilleras’ board chair Ray Dean Salvosa, and University of Baguio former president Virgilio Bautista formally endorsed the Leni-Kiko tandem during Monday’s Takder Kordi rally at the Melvin Jones Grandstand in the heart of Baguio City.

With their endorsement, the three Baguio universities join the long list of educational institutions that have thrown their support behind the opposition tandem, widely seen as the “best chance” to thwart the Marcoses’ comeback to Malacañang.

Their endorsement is especially remarkable as they are widely seen as leaders in the Cordilleran region, known to be a solid Marcos country.

For the three officials, Robredo and Pangilinan also represent a brand of governance that is “God-fearing, honest and with genuine love for the country and for Filipinos,” Sales said.

Salvosa noted that this was the first time in history that these universities “are shedding their neutrality and openly coming out for Robredo and her team.”

“This is a moral crisis, this is a battle for the soul of our nation,” Salvosa said in a stirring speech. “You have seen in the polls that (her chief rival Ferdinand) Marcos Jr. is leading…This happened in part because of the failure of our education system, we did not see the power of social media.”

He urged fellow Kakampinks to “go out of your circles and convince others who have been deceived by fake news.”

Bautista, meanwhile, told the crowd of what their generation had gone through during the Marcoses’ 21-year rule, 14 of which were spent under the shadow of martial rule. Several human rights organizations estimate that around 3,257 were killed, while 35,000 were tortured and 70,000 were arrested during the brutal regime.

“You won’t understand what we had suffered through because you now enjoy the gains of our hard-fought freedoms,” he said. “When we were young, we were repeatedly told: It’s bad to lie, it’s bad to steal. Why would we allow them to (take power?)”