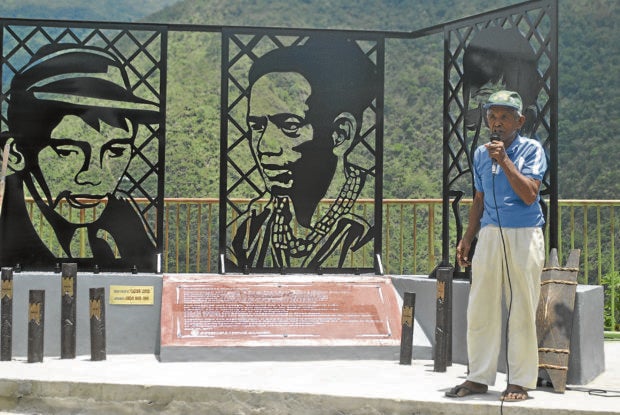 MARTYRS Members of the Cordillera Peoples Alliance (CPA) protest the impending demolition of the monument and marker that pay tribute to the Cordillera martyrs who opposed the construction of four hydroelectric dams along the Chico River during martial law. —CPA PHOTO

BAGUIO CITY, Benguet, Philippines — The National Historical Commission of the Philippines (NHCP) has advised a town in Kalinga province to treat a monument dedicated to Macli-ing Dulag, along with other tribal leaders of the opposition to the Chico River dams, with “utmost respect and reverence,” asserting that the Cordillera martyr has been recognized as a national hero.

The memorial to Macli-ing, Pedro Dungoc and Lumbaya Gayudan, as well as members of tribes who blocked the construction of four hydroelectric dams along Chico River during the Marcos regime, has been ordered demolished by the Department of Public Works and Highways (DPWH) for allegedly encroaching on the road right of way of a national road in Tinglayan town, Kalinga province.

“Monuments of our heroes, illustrious personages and leaders of the locality have to be respected,” NHCP Chair Rene Escalante said in a letter to Tinglayan Mayor Sacramento Gumilab.

Escalante, however, said the Macli-ing memorial “is a local monument, [and] therefore, the local government unit (LGU) of Tinglayan has the jurisdiction concerning developments that may affect [it].”

According to him, the NHCP “recognized the heroism of Macli-ing Dulag through a proposed historical marker in 2013.” The NHCP notified the Tinglayan municipality about the government marker, but the agency never got an official reply.

The memorial was built at the edge of a cliff by the militant Cordillera Peoples Alliance (CPA) at the behest of the heroes’ families in 2017. It is composed of a marker honoring the three men and everyone who opposed the multimillion-peso project that would have submerged communities and displaced hundreds of residents in Kalinga and Mountain Province.

Its most distinct feature is a set of metal portraits of Macli-ing, Dungoc and Gayudan.

In a series of demolition notices to the CPA, the upper Kalinga district engineering office said the monument was built 4.1 meters from the centerline of the Barangay Bugnay section of the Mountain Province-Calanan-Pinukpuk-Abbut Road.

The DPWH action followed a resolution filed by an advisory council of the Kalinga police, which called for the monument’s demolition.

The removal was stalled by backdoor negotiations between the heroes’ families and the provincial government.

AntigovernmentLast week, the families were invited to a public hearing initiated by the provincial board on the planned removal of the monument reportedly due to its “antigovernment” inscriptions.

The hearing was called by the board’s committees on rules and ethics, landmarks and tourism, but it did not invite the CPA, the main oppositor to the demolition.

Escalante attached a copy of the NHCP’s letter indicating the content of its proposed marker for Macli-ing, as presented by his predecessor, Dr. Maria Serena Diokno. It would have credited Macli-ing for speaking for the ancestral land rights of indigenous peoples and for gathering together Cordillera tribes through a peace pact, called “bodong,” to rally against the Chico Dam project in 1974.

A World War II veteran, Macli-ing was killed by government soldiers on April 24, 1980.

Escalante said: “It is highly recommended that LGUs formulate zoning guidelines or local ordinances for the protection and development of monument sites and the promotion of a clean arid green environment, and strictly implement these laws, especially in places where important monuments and structures are located.”

A buffer zone should be provided near monuments or sites and should be made part of the LGU’s land use and zoning regulations through local ordinances, he said.

“Town planning and development projects must always include respect for important historic sites and monuments,” he added.