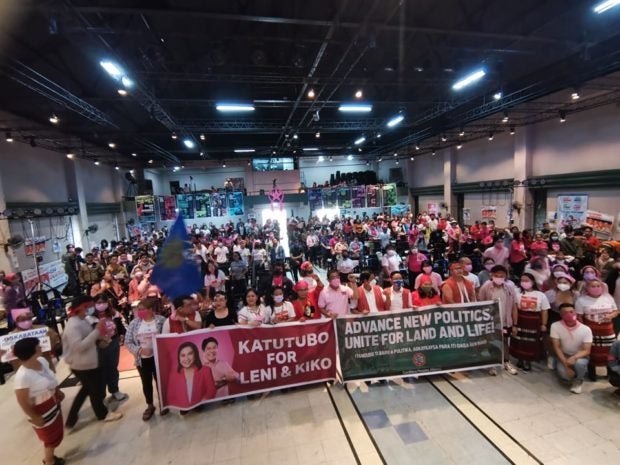 Delegates from the Cordillera Peoples Alliance gather at the University of the Cordilleras in Baguio City for the closing ceremony of the 38th Peoples’ Cordillera Day. They also expressed their support for the candidacies of presidential candidate and Vice President Leni Robredo and her running mate, Sen. Francis “Kiko” Pangilinan. (Photo by Kimberlie Quitasol)

The delegates, who gathered Monday for the closing ceremony of the 38th People’s Cordillera Day, also expressed their support for Makabayan senatorial candidates Neri Colmenares and Elmer Labog during the event at the University of the Cordilleras.

The People’s Cordillera Day started as a memorial for Macliing Dulag, who was murdered by government soldiers on April 24, 1980, for leading his community in staunch opposition to the Chico River dam, which was among the flagship projects of the Marcos dictatorship.

The first Macliing Memorial, held on April 24, 1981 was, at times, a centralized activity hosted by the various Cordillera provinces on April 24.

But there were also decentralized celebrations with smaller gatherings in the different provinces and even abroad.

This year’s decentralized staging was from April 23 to 30 in Abra, Apayao, Benguet, Kalinga, Mountain Province, Ifugao, Hong Kong, and Hawaii.

Beverly Longid of the Indigenous Peoples Movement for Self Determination and Liberation shared that Robredo and Pangilinan signed on April 5 a covenant with indigenous peoples and promised to support their aspirations for the recognition of their rights in Rizal province.

She said the key demands included a stop to destructive projects on IP lands that include dams and mines; the junking of Executive Order 70, the Anti-Terrorism Law, and the Indigenous Peoples Rights Act (IPRA).

The covenant also included demands for the recognition of the indigenous peoples’ self-ascription and social justice, she added.

The delegation will also attend the Robredo-Pangilinan Cordillera grand rally in this city on Monday afternoon. INQ