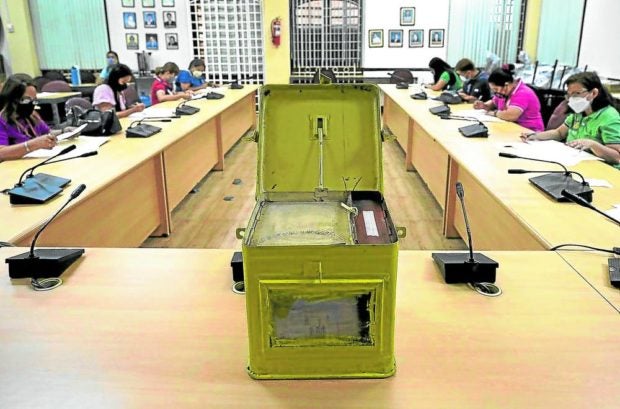 ABSENTEE VOTING Teachers cast their vote on the last day of three-day local absentee voting at the Manila Division office. They will serve as Board of Election Inspectors in the upcoming elections. —RICHARD A. REYES

MANILA, Philippines — With exactly one week left before the national and local elections, the Catholic Bishops’ Conference of the Philippines (CBCP) is urging the electorate to form circles of discernment and apply the “LASER” test in evaluating the candidates they would vote for.

Under the i Vote God campaign, the five-point LASER test is intended to guide the voters in discerning the candidates based on their lifestyle, accomplishments, sources of support, election conduct, and reputation in the community (LASER).

“These are concrete indicators of what it means to be pro-God, pro-people, pro-country, and pro-nature,” Fr. Victor Carmelo Diola, founder of the Church-based group Dilaab Foundation, said in a March press briefing.

The Cebu-based priest said the term Laser test was coined in 2008 as part of a mechanism to form consciousness among voters and empowerment through the circles of discernment.

“Let us respond to the call for us to fulfill our responsibilities by being politically involved and discern carefully, which leaders and candidates are truly competent and credible, and have the sincere intention to serve for the common good of the country,” CBCP said.

It also called on voters to “never compromise” one’s moral principles in political involvement and “be on guard against lies, evil, the suspicious and those who take advantage of the weak and vulnerable.”

In their second pastoral statement on the 2022 elections released in March, Caloocan Bishop and CBCP president Pablo Virgilio David warned the Catholic faithful against those who exploit the vulnerability and poverty of the Filipinos just to get their votes.

“May we not forget: the welfare of all is everybody’s responsibility … Can we afford to be indifferent while our freedom and our future are at stake?” the CBCP said.

CBCP president David to voters: ‘Ask yourself who will act like a boss or a servant’