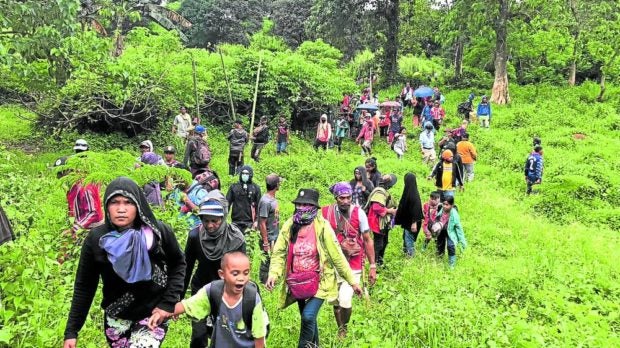 OUR DOMAIN | Members of the Manobo-Pulangiyon tribe enter part of their claimed ancestral land, along with presidential aspirant Leodegario “Ka Leody” de Guzman on April 19. (Photo from the Facebook page of Leody de Guzman)

CAGAYAN DE ORO CITY, Misamis Oriental, Philippines — Barely two weeks after armed men shot at members of the Manobo-Pulangiyon indigenous people when they entered a part of their ancestral land in Bukidnon province with presidential aspirant Leodegario “Ka Leody” de Guzman, the National Commission on Indigenous Peoples (NCIP) ordered the company occupying the land to stop its operation there.

Allen Capuyan, NCIP chair, posted on his Facebook page on Saturday a copy of a cease and desist order (CDO), issued and served to Kiantig Development Corp. (KDC), the company occupying a portion of the Manobo-Pulangiyon’s ancestral land.

Members of the tribe earlier petitioned the NCIP to issue a CDO after five of them were wounded when gunmen, believed to be security personnel of the company occupying the land, had fired at them when the tribe and De Guzman entered the area on April 19.

“This resolves the petition filed by the Manobo-Pulangiyon indigenous peoples, praying for an order enjoining the operators and owners of the KDC, all persons claiming rights under it, and all illegal occupants of the Manobo-Pulangiyon ancestral domain located in the municipality of Quezon, province of Bukidnon,” part of the order said.

Capuyan also posted the copy of the order, which indicated that the company’s security personnel guarding the contested site already received it.

Leonardo Montemayor, Federation of Free Farmers chair and former agriculture secretary, said the CDO would be instrumental in the return of the displaced tribe to their ancestral home.

“Hopefully, this development will pave the way for the early repossession by the Manobo-Pulangiyons of their land,” Montemayor said.

The CDO also cited the expiration of the 25-year Forest Land Grazing Management Agreement (FLGMA) earlier issued by the Department of Environment and Natural Resources (DENR) for the the area and the absence of the required consent from the tribe for the company to occupy their land.

Since 2017, about a thousand Manobo-Pulangiyon families have been living in makeshift shelters beside the national highway in Quezon town after they were driven away by KDC.

The property currently occupied by KDC is part of the 1,111 hectares claimed by the Manobo-Pulangiyon tribe as their ancestral domain spanning Barangays Butong and San Jose in the town.

In 1986, an entity called Cesar Fortich Inc. was able to secure a 25-year FLGMA from the DENR on a 995-ha estate within the tribe’s ancestral domain claim. The FLGMA expired in 2018.

Some time in 2007, Cesar Fortich Inc. changed its name to KDC and reportedly appointed Pablo Lorenzo III, now incumbent mayor of Quezon, as its general manager.