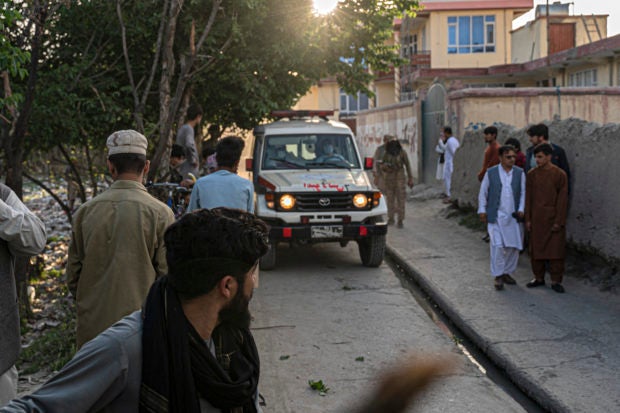 Onlookers walk next to an ambulance carrying victims near the site of a blast in Kabul on April 29, 2022. – A blast ripped through a Sunni mosque in the Afghan capital on April 29, killing up to 10 people, an interior ministry official said. (AFP)

BEIRUT, Lebanon  – The so-called Islamic State group on Saturday claimed responsibility for an attack on a mosque in the Afghan capital Kabul a day earlier that killed at least 10 worshippers.

They had detonated an explosive device placed near a bus in Kabul’s Sector 6, the group said in a message posted on its Telegram account.

The group said the attack had killed 10 people, the same toll announced by Afghanistan’s interior ministry. Kabul police said another 30 were wounded.

Afghan officials have said the attack appeared to have targeted members of the minority Sufi community performing rituals after completing Friday prayers.

Grisly images of Friday’s blast posted on social media showed survivors running out of the mosque, with some carrying victims including children.

On Saturday, a spokesman for the United Nations Secretary-General Antonio Guterres issued a statement condemning the attack.