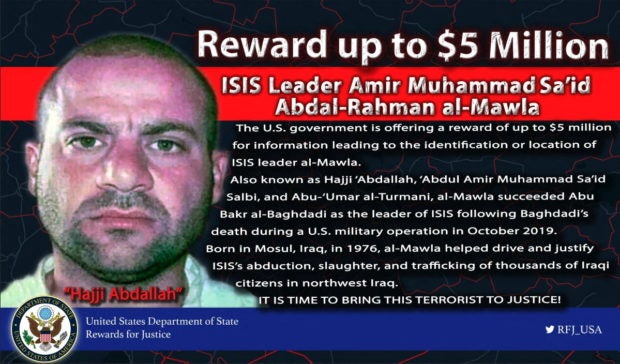 A ‘wanted’ notice for the Islamic State jihadist group leader Abu Ibrahim al-Quraishi, who had led ISIS since the death in 2019 of its founder Abu Bakr al-Baghdadi, is seen in this image obtained by Reuters from social media on February 3, 2022. US Government Handout/via REUTERS

Quraishi, a religious scholar and soldier in former Iraqi leader Saddam Hussein’s army who led IS from the shadows for a little over two years, died in a U.S. special forces raid in northern Syria in February when he detonated a bomb that killed him and family members, the U.S. administration said.

The death of Quraishi, 45, was another crushing blow to IS two years after the violent Sunni Muslim group lost longtime leader Abu Bakr al-Baghdadi in a similar raid in 2019.

The group did not deny or confirm the U.S. narrative and the new IS spokesman, Abu Umar al Muhajir, said in a recorded speech on Thursday that Quraishi’s last battle was‮ ‬at Ghuwayran prison in the northeastern Syrian city of Hasaka.

At least 200 prison inmates and militants as well as 30 security forces died in an Islamic State attack on the jail in January in a bid to free their members, officials have said.