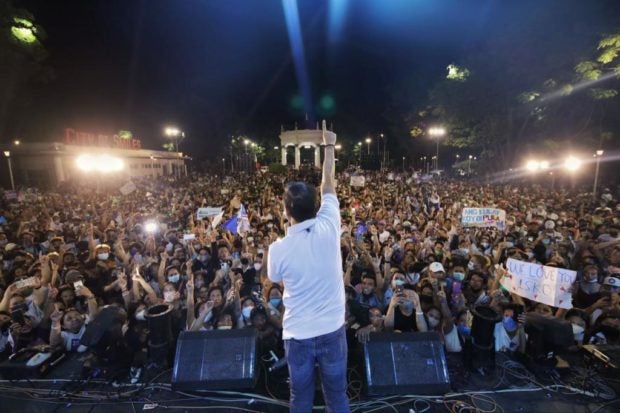 MANILA, Philippines — Aksyon Demokratiko standard-bearer Francisco “Isko Moreno” Domagoso has capped his four-day barnstorming of the Western Visayas region by offering voters “peace of mind” and an assurance that the minimum basic needs of the people will be provided by his administration.

The 47-year-old incumbent mayor of Manila said he learned about MBN and HDI at the University of the Philippines’ National College on Public Administration and Governance (UP-NCPAG). 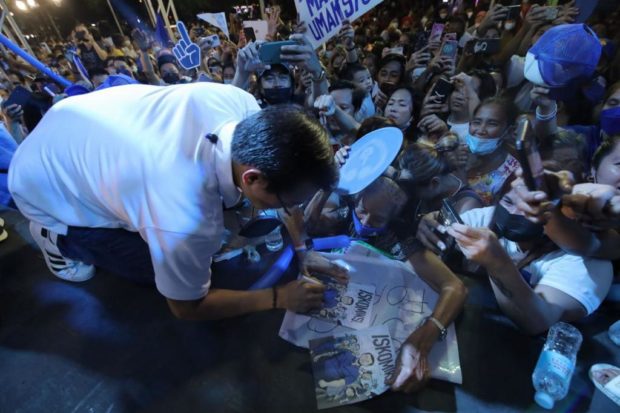 Moreno continued: “I remember my teacher told me when you address the minimum basic needs, tumataas ang antas ng pamumuhay ng tao, yung quality of life tumataas. Simula nung 1998 hanggang ngayon, 24 years na, that’s what I’ve been doing in Manila. From being a councilor and vice mayor in my own little way. And when I became mayor, meron ng enough resources to make changes. Immediately we implemented yung mga dreams and aspirations ko sa taong bayan. So, that’s why I can honestly say to you and the staff here in Bombo and to the listeners and viewers that I get things done.”

In his speech, Moreno said it’s important for the 67.5 million registered voters to think carefully before choosing whom they want to become the next president of the country. He warned that if either the candidate from the red or the yellow/pink side wins, the ongoing conflict between them will not stop but will further heighten. 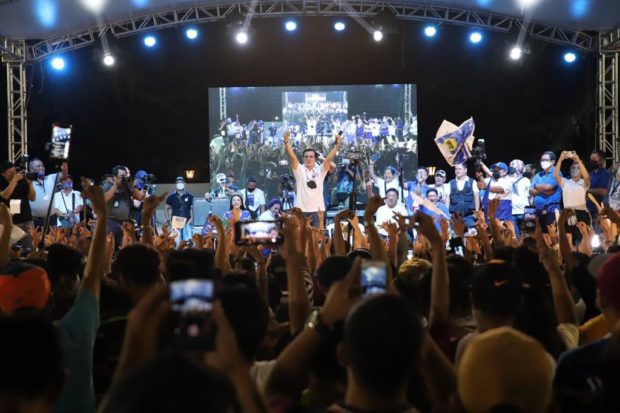 Moreno said if the people want to have peace of mind and are already tired of the decades-old feud between the Marcoses and the Aquinos or their supposed surrogates, they should choose him as their next president.

Moreno claimed his warning came to fruition when supporters of both Vice President Leni Robredo and Ferdinand “Bongbong” Marcos had a shouting match inside the Powerplant Mall in Makati City on Thursday. The incident was caught on video and became viral on the social media site YouTube, earning different reactions from viewers.

Thursday afternoon, Moreno and the rest of Team Isko attended a town hall meeting at Binalbagan Plaza and had a courtesy call to Binalbagan Mayor Alejandro Mirasol.

Earlier in the morning, Moreno and his slate also visited St. Jude Thaddeus Parish in Bacolod City and paid a courtesy call to Mayor Evelio “Bing” Leonardia, where Moreno was mobbed by hundreds of his supporters at the Bacolod City Hall. 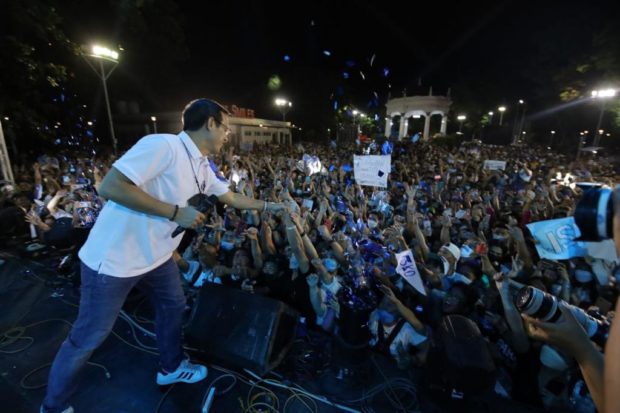 At the Isinggit Mo, Isko! Concert-Rally at the Bacolod Public Plaza later in the evening, entertainers that included This Band, Hotdog, Chiez Band, Cali Island, Carl Malone Montecido, and many others performed on stage to the delight of the crowd that peaked at 15,000.

If he becomes president, Moreno vowed to address poverty, hunger, unemployment, inequality, and social injustice through an inclusive and equitable infrastructure development program as spelled out under his 10-point Bilis Kilos Economic Agenda.

To achieve this, Moreno will continue the Build, Build Build program of President Rodrigo Duterte, with a focus on building more public housing, more public schools, and more public hospitals across the country to create more jobs and opportunities for our people.

To further alleviate the plight of the masses and protect industries, Moreno will work closely with Congress to reduce the taxes on two of the most basic of commodities – petroleum and electricity.

‘Taste of their own medicine’: Isko Moreno doubles down on pushing Robredo’s withdrawal