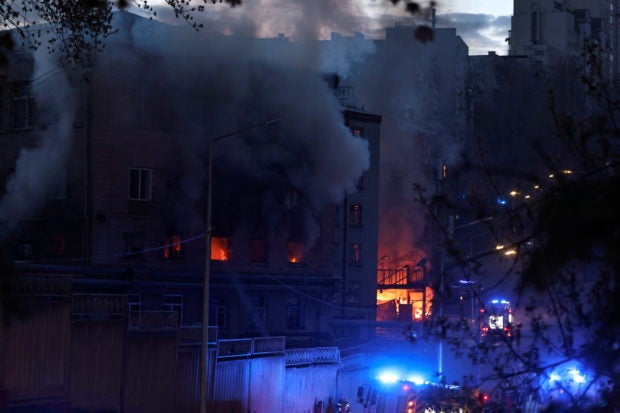 Fire burns in a building after a shelling, amid Russia’s invasion of Ukraine, in Kyiv, Ukraine April 28, 2022. (REUTERS)

KYIV  – Russia fired two missiles into Kyiv on Thursday during a visit by U.N. Secretary General Antonio Guterres, Ukrainian officials said, as Moscow pressed an assault in the east that drew new U.S. pledges of military and humanitarian aid.

The rockets shook a central district in Ukraine’s capital and one of them hit a residential building, injuring at least three people, Kyiv Mayor Vitali Klitschko said. Reuters witnesses reported hearing two explosions, but their cause could not immediately be verified.

Russia withdrew its invading forces from near Kyiv in early April after failing to capture the city, which has since hosted visits by top officials from the United States and its European allies.

“There was an attack on Kyiv … it shocked me, not because I’m here but because Kyiv is a sacred city for Ukrainians and Russians alike,” Guterres told Portuguese broadcaster RTP when asked about the blasts.

There was no immediate Russian comment on the blasts. Zelenskiy said they “prove that we must not drop our vigilance. We must not think that the war is over.”

Guterres’ discussions with Zelenskiy focused in part on evacuating Ukrainian fighters and civilians holed up in a steel plant in the besieged southeastern city of Mariupol, Russia’s main target in the eastern Donbas region.

Russian President Vladimir Putin agreed in principles to U.N. and Red Cross involvement in evacuating the plant during separate talks in Moscow with Guterres on Tuesday. Ukrainian officials worry Russia wants to capture those trapped inside, an allegation Moscow denies.

The West believes battles for Mariupol and other eastern and southern areas may determine the war’s outcome. Russian forces are now entrenched in the east, where Moscow-backed separatists have held some territory since 2014, and also hold a swathe of the south they seized in March.

Ukraine’s general staff said Russia was stepping up its military assault in the Donbas.

“The enemy is increasing the pace of the offensive operation. The Russian occupiers are exerting intense fire in almost all directions,” it said.

Ukraine dismisses Putin’s claims of persecution and says it is fighting an imperial-style land grab that has flattened Ukrainian cities, forced more than 5 million to flee abroad and killed thousands.

Heeding repeated Ukrainian pleas for heavier weaponry, U.S. President Joe Biden asked Congress on Thursday for $33 billion to support Kyiv, a massive jump in funding that includes over $20 billion for weapons, ammunition and other military aid.

The package, intended to cover needs through September, builds on efforts by the United States and its allies to punish Russia for its Feb. 24 invasion.

“We need this bill to support Ukraine in its fight for freedom,” Biden said on Thursday. “The cost of this fight – it’s not cheap – but caving to aggression is going to be more costly.”

Washington, which together with its allies has placed sweeping sanctions on Moscow, hopes Ukrainian forces can not only repel Russia’s assault on the east but also weaken its military so that it can no longer menace neighbours.

Russia says that amounts to NATO waging a “proxy war” against it, and has made a number of threats this week of unspecified retaliation. It cut gas supplies to Poland and Bulgaria on Wednesday after they refused to pay in roubles, marking Moscow’s toughest response yet to Western economic sanctions.

Russia has also reported what it says have been a series of Ukrainian strikes on Russian regions that border Ukraine and has warned that such attacks risk significant escalation.

On Thursday, two big explosions were heard in the Russian city of Belgorod near the border with Ukraine, two witnesses told Reuters. It was not clear what caused them and whether there were any casualties or damage.

Ukraine has not directly accepted responsibility for strikes inside Russia but says the incidents are payback. Russia has taken umbrage at statements by NATO member Britain that it is legitimate for Ukraine to target Russian logistics.

“In the West, they are openly calling on Kyiv to attack Russia including with the use of weapons received from NATO countries,” Russian Foreign Ministry spokeswoman Maria Zakharova told reporters in Moscow.

“I don’t advise you to test our patience further.”

Ukraine reported blasts overnight in the southern city of Kherson, the only regional capital Russia has captured so far since the invasion.

Russian troops in Kherson used tear gas and stun grenades on Wednesday to quell pro-Ukrainian crowds, and were shelling the entire surrounding region and attacking towards Mykolaiv and Kryvyi Rih, Ukrainian officials said.

Russian state media quoted an official from a self-styled pro-Russian “military-civilian commission” in Kherson on Thursday as saying the area would start using Russia’s rouble currency from May 1.

The U.S. mission to the OSCE security body said the Kremlin might attempt “sham referenda” in southern and eastern areas it had captured since the Feb. 24 invasion, using “a well-worn playbook that steals from history’s darkest chapters”.

“These falsified, illegitimate referenda will undoubtedly be accompanied by a wave of abuses against those who seek to oppose or undermine Moscow’s plans,” the U.S. mission said. There was no immediate Russian comment.