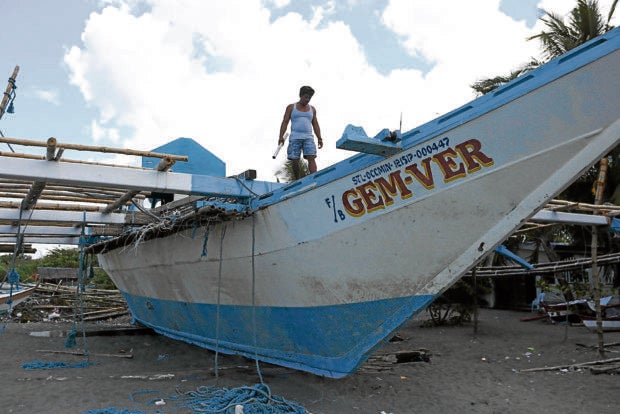 FILE PHOTO: Captain Junel Insigne looks on the F/B GEM-VER, the boat sunk by a Chinese vessel in the West Philippine Sea, at the shoreline of Barangay San Roque I in San Jose, Mindoro Occidental, in June 2019. Insigne and his 21 crew survived the 3 hours of floating on the sea after a Chinese vessel rammed and sank their fishing boat F/B Gem-Ver in Recto Bank, West Philippine Sea. INQUIRER/RICHARD A. REYES

MANILA, Philippines — Filipino fishermen onboard the Gem-Ver fishing boat rammed by a Chinese fishing vessel near Recto Bank in 2019 will finally be compensated.

“I confirm that there has been a final settlement of the damage claims of the Gem-Ver fishermen against the owners of the Chinese vessel,” Justice Secretary Menardo Guevarra told reporters Thursday.

He said the agreed compensation is P6 million.

“I understand that the owner of FB (fishing boat) Gem-Ver will receive the amount on behalf of the fishermen and himself,” he added.

Gem-ver was rammed by the Chinese vessel Yuemaobinyu 42212 around midnight of June 9, 2019, near Recto Bank within the Philippines’ exclusive economic zone. The 22 Filipino boat crew members were abandoned at sea for at least two hours before they were rescued by a passing Vietnamese fishing boat.

Negotiations between Philippine officials and representatives from China’s Bureau of Fisheries over the incident only commenced two years after it happened.