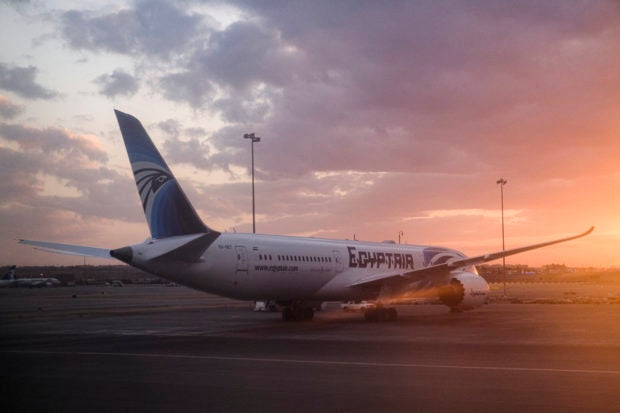 This picture taken on January 16, 2020 shows an EgyptAir Boeing 787-9 “Dreamliner” jet parked on the tarmac at Cairo International Airport outside the Egyptian capital. AFP FILE PHOTO

ROME—An EgyptAir crash in 2016 that killed 66 people in the Mediterranean was likely caused by a fire that started in the cockpit, according to the conclusions of French experts contained in documents revealed on Wednesday.

According to a 134-page document seen by Italian daily Il Corriere della Sera and sent to the Paris court of appeal in March, a fire on board was likely to have been caused by the conjunction of two factors.

These were a leak from the co-pilot’s oxygen mask and the combustion of a cigarette smoked by the pilot or co-pilot.

EgyptAir flight MS804 suddenly disappeared from radar screens on May 19, 2016 on its way to Cairo from Paris, killing everyone on board.

Egypt’s aviation minister had initially said a terrorist attack, rather than lack of maintenance, was more likely to have brought down the plane.

France’s aviation safety agency, however, said the aircraft transmitted automated messages indicating smoke in the cabin and a fault in the flight control unit minutes before losing contact.

Black box recordings corroborate the French experts’ hypothesis, according to the Italian newspaper.

The experts in particular isolated two “rustling” sounds coming from the microphone incorporated into the co-pilot’s mask, a few minutes before the accident, probably indicating a strong flow of air, the mask having been put on “emergency” mode.

The fire itself was started by “a spark or a flame” probably caused by a cigarette.

In June 2018, two experts requested by investigating judges in Paris highlighted the replacement, three days before the crash, of the box containing the co-pilot’s oxygen mask, for unknown reasons.

“The replacement of this equipment requires very careful verification…, oxygen leaks being particularly dangerous”, they had said.

And in a report published in July 2018, the French Civil Aviation Safety Investigation Bureau (BEA) claimed that its “preferred hypothesis” was “that a fire broke out in the cockpit…, a fire which developed rapidly and led to the loss of control of the aircraft”.

The document revealed by Il Corriere della Sera also revealed that the two pilots said they were “tired by this night flight and the lack of sleep”.

However, the information available to the legal experts suggested that “the rest schedules were respected”.

Those killed in the crash included 40 Egyptians and 15 French citizens.