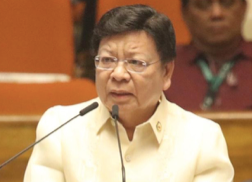 MANILA, Philippines — House Deputy Speaker Rodante Marcoleta, one of the lawmakers that led opposition to ABS-CBN’s franchise renewal, has decided to withdraw his senatorial bid.

This came 12 days before the May 9 elections.

Commission on Elections (Comelec) Commissioner George Garcia confirmed the information Wednesday. He also explained that all votes cast for Marcoleta on May 9 will be considered stray.

Marcoleta in a statement cited poor showing in surveys as the reason behind his decision to quit the senatorial race.

Marcoleta was running under the UniTeam slate of Ferdinand “Bongbong” Marcos Jr. and Inday Sara Duterte-Carpio and the PDP-Laban party.

“The fighter in me should be brave enough to read the writings on the wall. Let’s call spade a spade,” he said.

Marcoleta thanked President Rodrigo Duterte for encouraging him to run for senator. He also thanked the UniTeam, PDP-Laban, and the People’s Reform Party for including him in their senatorial list.

“I will be indebted forever to several people who chipped in their resources, time, and tons of hardworking into my memorable campaign,” he said.

“I thank the hundreds of parallel support groups and thousands of volunteers who believed in my advocacies and the measures that must be pursued for the common good. I just hope that they will all be so kind and accommodating enough to understand,” he added.

Marcoleta vowed to continue supporting the Marcos-Duterte tandem for the May 9 elections.

“The BBM-Sara tandem exemplifies the politics of unity and working together, despite the divergent political persuasions, for the sake of the motherland—an element that is conspicuously absent in other teams,” Marcoleta said.

Based on the latest Pulse Asia survey released on April 6, Marcoleta falls within the 24th to 30th rank among senatorial candidates.

Your subscription could not be saved. Please try again.
Your subscription has been successful.
Read Next
4 killed, 15 rescued as bridge in Bohol collapses
EDITORS' PICK
ACT slams Edca on 124th anniversary of PH-American war: ‘Tila hindi umalis ang mananakop’
Philippines central bank to focus on inflation at next policy meeting – governor
Only 38% of students grade 1 to 3 prefer local language as medium of instruction — Pulse Asia
House energy committee chair Arroyo bats for cheap electricity
Omega Speedmaster super racing: Tiny device massive change
vivo Philippines offers a free bouquet of flowers and a premium necklace perfect for Valentine’s Day
MOST READ
Pokwang admits she lied about cause of split with Lee O’Brian: ‘Umasa akong aayusin pa niya’
Vice Ganda asserts all is well with Karylle, takes swipe at ‘kuya’ who chimed in to be ‘trending’
Immigration detention head, 35 others sacked over foreign detainees’ VIP treatment
OWWA chief Arnell Ignacio: Socmed manager behind post on my love life
Don't miss out on the latest news and information.