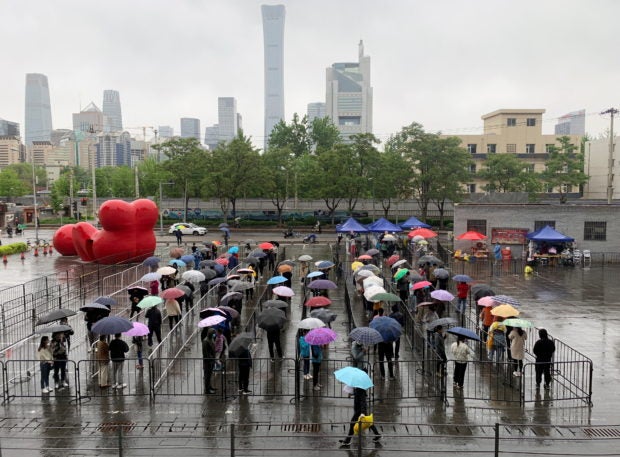 People line up at a makeshift nucleic acid testing site amid a mass testing for the coronavirus disease (COVID-19) in Chaoyang district of Beijing, China April 27, 2022. REUTERS/Thomas Suen

SHANGHAI — The second round of COVID-19 testing in Beijing’s largest district began on Wednesday, with this week’s campaign to screen most of the Chinese capital’s 22 million residents so far detecting less than three dozen new infections a day.

Beijing residents have rushed to stock up on food and other supplies as the city races to stop a nascent outbreak and avert a city-wide lockdown like that which has paralyzed Shanghai for the past month, leaving some in the Chinese commercial hub of 25 million venting extreme frustration.

Authorities in the capital have so far focused on early mass testing, whereas Shanghai waited for a about a month before launching a city-wide screening campaign.

In Beijing, Shi Wei, 53, a retiree, said he was encouraged by the city’s low caseload so far, but nervous.

“These past two days every time I go to the supermarket there are lots of people, so I just turn around and leave, as I feel slightly unsafe,” he said. “I can understand the panic, given what happened in Shanghai.”

Beijing screened the more than 3.5 million residents of its Chaoyang district on Monday, all of whom are due for new tests on Wednesday. On Tuesday, 16 million from other districts were also screened and will be re-tested on Thursday.

It was unclear what percentage of those tests led to the detection Beijing’s 31 new COVID cases on Tuesday, compared with the previous day’s 33. No deaths have been recorded so far.

Meanwhile Shanghai reported 48 new deaths on April 26, down from 52 the day before. That takes the official death toll to 238, all reported from April 17 onwards, although many residents have said relatives or friends died after catching COVID as early as March, casting doubt over the statistics.

Cases outside quarantined areas dropped to 171 from 217. Other cities that have been under lockdown began easing restrictions once such cases hit zero.

Shanghai’s prolonged isolation has fuelled frustration over lost income, family separation and quarantine conditions, as well as access to health services and food. For many, the regular tests present the only chance to open their front doors.

“This whole April, up to now, we have done 16 nucleic acid tests – this costs a huge amount of taxpayer’s money,” one Shanghai resident said in a post on the WeChat social media platform.

The outbreak has caused severe economic damage to China’s most populous city. Shanghai’s economy grew 3.1% in the first quarter from a year earlier, significantly less than the 4.8% growth at national level, and less than half the 8.1% growth seen for the whole of 2021.

Hundreds of factories have been allowed to resume operations, mostly with a small number of workers sleeping on site, with state media giving ample air time to the reopening of U.S. carmaker Tesla’s plant in Shanghai last week.

But industry bodies say most factories are struggling to produce much as workers remain stuck at home, trucks linger in parking lots, and orders of components from contractors in the same situation are not being fulfilled.

In Shanghai’s finance sector, the biggest in mainland China, thousands of bankers, traders and investors are confined to their homes and struggling with basic needs.

Many say they are prepared to move back to other financial centers including Chinese-ruled Hong Kong, where the COVID situation has stabilized somewhat after ripping through the majority of its population earlier in the year.