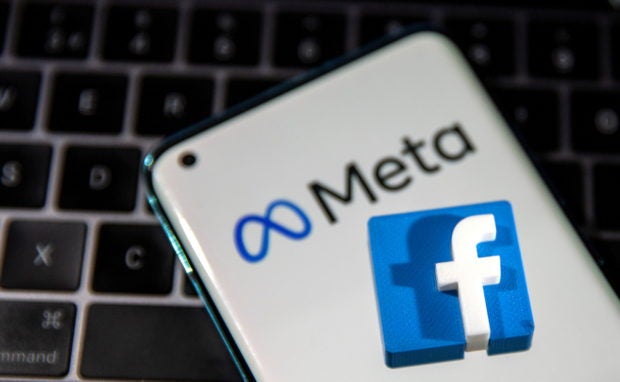 FILE PHOTO: A smartphone with Meta logo and a 3D printed Facebook logo is placed on a laptop keyboard in this illustration taken October 28, 2021. (REUTERS/Dado Ruvic/Illustration/File Photo)

This is in response to the request of Sen. Ramon “Bong” Revilla Jr. to Facebook for an explanation of its “flagging and removal of posts” from the pages of government officials and government media agencies.

“We have since resolved this issue and we will continue to monitor the situation,” a Meta spokesperson said in a statement sent to INQUIRER.net.

According to Meta, the links that are redirected to the affected government and nongovernment websites were blocked automatically from being shared on its platform as a preventive security measure.

Meta said it routinely monitors and enforces measures against potential cybersecurity threats, including through automated systems that help detect and prevent malicious activity on its platform.

The company is also in direct coordination with the affected government agencies and has informed them of its findings and actions.

Further, Meta clarified that affected website links and content were not flagged by any of its third-party fact checking partners.

Fact-checkers do not remove content, accounts, or pages from Meta’s apps, it said.

Meta removes content when it violates its community standards, which are separate from its fact-checking program, the company added.

When a third-party fact checker rates content as false, Meta said it significantly reduces that content’s distribution so that fewer people see it. It also applies warnings and misinformation labels to notify people who try to share it.