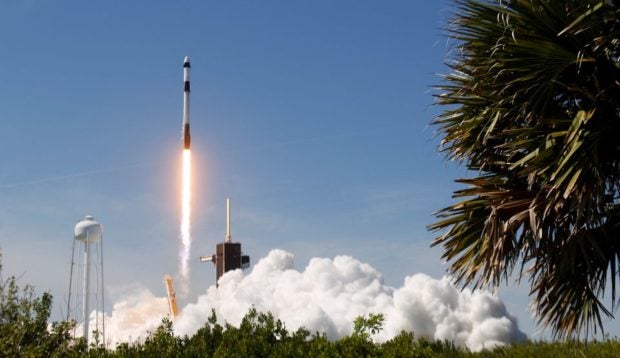 The first all-private astronaut team ever flown aboard the International Space Station (ISS) safely splashed down in the Atlantic off Florida’s coast on Monday, concluding a two-week science mission hailed as a landmark in commercialized human spaceflight.

The SpaceX crew capsule carrying the four-man team, led by a retired Nasa astronaut who is now vice president of the Texas company behind the mission, Axiom Space, parachuted into the sea after a 16-hour descent from orbit.

The splashdown capped the latest, and most ambitious, in a recent series of rocket-powered expeditions bankrolled by private investment capital and wealthy passengers rather than taxpayer dollars six decades after the dawn of the space age.

The mission’s crew was assembled, equipped and trained entirely at private expense by Axiom, a 5-year-old venture based in Houston and headed by Nasa’s former ISS program manager. Axiom also has contracted with Nasa to build the first commercial addition to and ultimate replacement for the space station.

Nasa, which has encouraged the further commercialization of space travel, furnished the launch site at its Kennedy Space Center in Cape Canaveral, Florida, and assumed responsibility for the Axiom crew while they were aboard the space station. The U.S. space agency’s ISS crew members also pitched in to assist the private astronauts when needed.

Connor, Stibbe and Pathy flew as customers of Axiom, which charges $50 million to $60 million per seat for such flights, according to Mo Islam, head of research for the investment firm Republic Capital, which holds stakes in both Axiom and SpaceX.

The splashdown, carried live by an Axiom-SpaceX webcast, was originally planned for last Wednesday, but the return flight was delayed and the mission extended about a week due to windy weather. The potential costs of such an extension were factored into Axiom’s contracts with Nasa and its customers, so none of the parties bore any additional charges, the company said.

The return from orbit followed a re-entry plunge through Earth’s atmosphere generating frictional heat that sends temperatures surrounding the outside of the capsule soaring to 3,500 degrees Fahrenheit 1,927 degrees Celsius).

Applause was heard from the SpaceX flight control center in suburban Los Angeles as parachutes billowed open above the capsule in the final stage of its descent – slowing its fall to about 15 miles per hour (24 kph) – and again as the craft hit the water off the coast of Jacksonville.

In less than an hour, the heat-scorched Crew Dragon was hoisted onto a recovery ship before the capsule’s side hatch was opened and the four astronauts, garbed in helmeted white-and-black spacesuits, were helped out one by one onto the deck. All were visibly unsteady on their feet from over two weeks spent in a weightless environment.

Each received a quick onboard checkup before they were flown back to Florida for more thorough medical evaluations.

“Everybody looks great and is doing reasonably well,” Axiom operations director Derek Hassmann told a post-splashdown news briefing, describing the astronauts as being “in great spirits.”

Axiom, SpaceX and Nasa have touted the occasion as a milestone in the expansion of privately funded space-based commerce, constituting what industry insiders call the “low-Earth orbit economy,” or “LEO economy” for short.

“We proved that we can prepare the crew in a way that makes them effective and productive on orbit,” Hassmann said. “What it demonstrates to the world is that there is a new avenue to get to low-Earth orbit.”

Launched on April 8, the Axiom team spent 17 days in orbit, 15 of those aboard the space station with the seven regular, government-paid ISS crew members: three American astronauts, a German astronaut and three Russian cosmonauts.

The ISS has hosted several wealthy space tourists from time to time over the years.

But the Axiom quartet was the first all-commercial team ever welcomed to the space station as working astronauts, bringing with them 25 science and biomedical experiments to conduct in orbit. The package included research on brain health, cardiac stem cells, cancer and aging, as well as a technology demonstration to produce optics using the surface tension of fluids in microgravity.

It was the sixth human spaceflight for SpaceX in nearly two years, following four Nasa astronaut missions to the ISS and the “Inspiration 4” flight in September that sent an all-private crew into Earth orbit for the first time, though not to the space station.

SpaceX has been hired to fly three more Axiom astronaut missions to ISS over the next two years.

SpaceX gets ready to launch first all-civilian crew to orbit