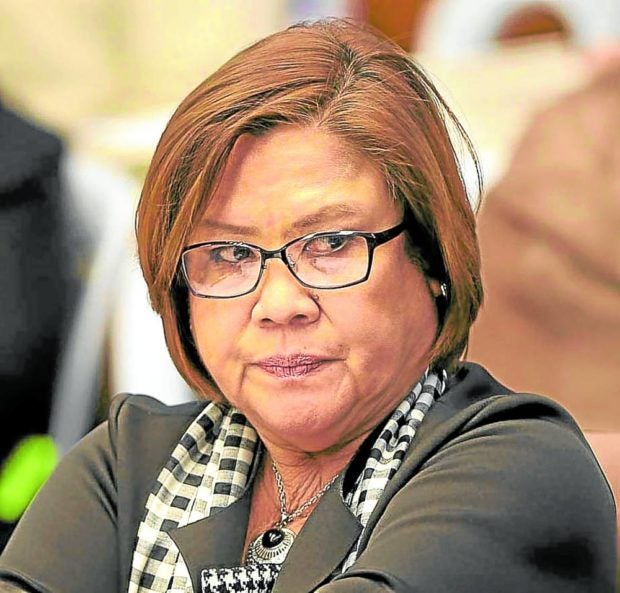 MANILA, Philippines — Senator Leila de Lima has called on the Senate to investigate alleged irregularities and lapses in the implementation of the Pantawid Pamilyang Pilipino Program (4Ps), the government’s social amelioration program for the poorest families in the country.

In two separate resolutions filed by de Lima through her staff on Monday, the Senator said that among the lapses reported by people on the ground was the Department of Social Welfare and Development’s (DSWD) supposed failure to hand the cash grants on time.

There were also claims that the number of beneficiaries was reduced — something that the Senate has to look into,  according to de Lima.

“Information recently gathered from some beneficiaries indicate that there were possible lapses in the implementation of the Program, including, but not limited to, delayed monthly financial benefits as well as reduction in the amounts received in many areas covered by the Program nationwide,” she said in a statement.

“Such lapses, if true, should be viewed with grave concern since these could result in noncompliance by some household-beneficiaries with the conditions for entitlement as provided for in Sections 11 and 12, respectively, of the Program,” she added.

Poor families can get assistance through Republic Act No. 11310 or the Pantawid Pamilyang Pilipino Program Institutionalization Act which has mandated the government through DSWD to provide monthly dole outs to beneficiaries of the social amelioration program (SAP).

However, de Lima mentioned that DSWD has encountered several issues with the implementation of the 4Ps, most notably the Commission on Audit (COA) findings for calendar year 2020, that the department was unable to utilize over P780.7 million of its funds which could have assisted 139,300 beneficiaries.

State auditors said in the annual audit report of DSWD, which was released sometime in August 2021, that the inclusion of unqualified beneficiaries in Regions 2, 7, 8, and 11 and in the Cordillera Administrative Region led to the funds being held.

“Given the DSWD’s crucial role in poverty alleviation, it can ill-afford any setbacks or inefficiencies in the implementation of its key social protection programs,” de Lima said.

“It behooves the Senate to ascertain whether the DSWD still has the capacity to ensure that none of programs are compromised by reason of institutional weaknesses brought about by the various duties it has been tasked to fulfill above and beyond its current mandate,” she added, noting in the resolution that DSWD only has a small personnel nationwide.

In contrast, the Senator said that there might be a need to expand DSWD’s manpower — from less than 3,000 now to around 25,000.

“These functions have even necessitated an expansion of the DSWD’s total manpower complement by eight times or 25,042 persons across its field offices, according to R2KRN (Right to Know Right Now Coalition),” de Lima noted.

Investigating the issue, de Lima said, would provide the Senate the understanding whether laws should be amended or if DSWD should not be the agency tapped to implement R.A. No. 11310.

INQUIRER.net has sought DSWD’s side on the issue but officials have not yet to issue any statement as of now.  However, the department assured that it is studying De Lima’s resolution.

The 4Ps is a law which de Lima is a principal author of, despite her status as a detainee at the Philippine National Police (PNP) Custodial Center in Camp Crame due to drug-related charges.

According to de Lima, who is seeking reelection as senator in the 2022 polls, another reason why the Senate needs to probe the issue is because there have been rumors that the 4Ps would not continue if certain candidates are not elected.