Tensions threaten to boil over in Jerusalem’s Muslim quarter 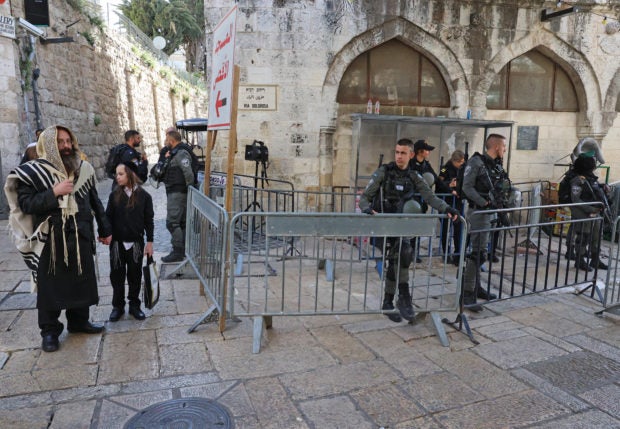 JERUSALEM—Standing in front of his shop on one of the main arteries through Jerusalem’s Old City, Palestinian grocer Alaa Zorba has a shouting match with an Israeli policeman.

This time around, the argument is brief and doesn’t spill over into violence.

But with tensions at boiling point just a few hundred metres (yards) from some of the holiest sites in Islam and Judaism, such incidents can quickly degenerate.

“They put oil on the fire,” Zorba said afterwards, as he moved stocks into his shop under the watchful eyes of three Israeli officers.

Zorba’s shop sits on the main route for Palestinian Muslims heading to pray at the Al-Aqsa Mosque compound, a key holy site in both Islam and Judaism and often the focal point of Israeli-Palestinian violence.

A few minutes earlier, 45-year-old Zorba had seen an officer check the papers of a Palestinian wanting to go and pray there — only to turn him back without any apparent reason and instruct him to try at another gate.

“I told them you’re not normal people,” said Zorba.

That sparked a loud argument. But despite exchanges of angry words, it did not turn physical, and soon both sides went back to their own business.

But Zorba is troubled by the situation.

“Day after day the tension is stronger,” he said.

The sight is so common these days that nobody pays them any attention.

The Old City of Jerusalem, with its Jewish, Muslim, Christian and Armenian quarters, swarms with tourists and pilgrims, security forces, merchants and its residents who live in a constant state of tension.

Both Muslim and Christian Palestinians as well as rights groups accuse Israeli ultra-nationalist groups of trying to “Judaise” the district, which lies in the Israel-annexed eastern sector of Jerusalem.

And in what Palestinians see as a blatant provocation, Jewish hardliners have been stepping up visits to the esplanade.

By long-standing tradition, Jews may visit but not pray at the site, seen in Judaism as the holiest place in the world.

Their repeated visits, as Jewish Passover clashes with Muslim Ramadan, have been blamed for sparking protests followed by police crackdowns that have wounded more than 200 Palestinians in the past week.

This week, more than 3,800 Jews made pilgrimages to the site, according to the group that organises the tours, a record for the Passover period.

“The situation is very difficult in Jerusalem. The mood right now is like we’re at war,” said Firas Mohamad.

He runs a spice shop near a major entrance to the Al-Aqsa compound and the main route to the Western Wall, the holiest place where Jews are allowed to pray.

He blames the tensions on groups of Jewish pilgrims who frequently pass his shop, accompanied by security guards.

“The come in groups, with flags, and chant ‘Death to Arabs, death to Muslims’, and dance in the street. This makes problems,” he said.

“The police does nothing, they just look after them. If I say a word, the police comes to me. So we can’t say or do anything.”

As they leave the site, some Jewish worshippers sing religious songs or prostrate themselves, kissing the stones.

For Palestinian Muslims, these visits are seen as provocations.

One worshipper, with a prayer shawl under his arm walked quickly past a group of police.

He wished them “Happy Passover — and thank you.”

Asked why, he said: “Because they are our guardians, they are protecting us. We wouldn’t be able to walk here that easily if they weren’t here.”

But Palestinian Nader Zaro, who runs a nearly empty cafe on the nearby Via Dolorosa, voiced worries about the future.

“They keep going and going, and one day, it’s going to explode in a big war,” he said.