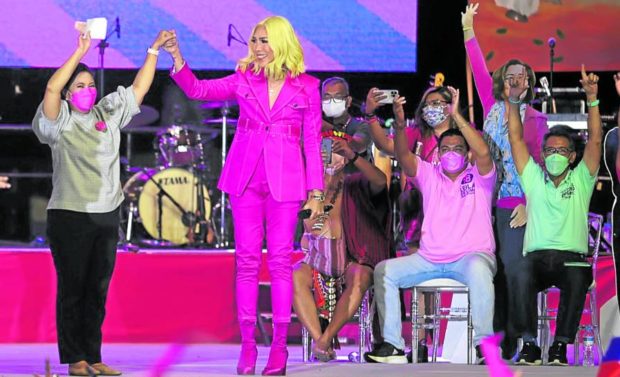 MANILA, Philippines — More popular celebrities made their separate endorsements of the presidential bid of Vice President Leni Robredo at a mammoth rally on her 57th birthday on Saturday, prompting veteran political campaigner, Sen. Franklin Drilon, to declare that “if the elections were held last night, we would have won.”

Speaking to reporters in Iloilo City, the senator said the 412,000-strong attendance in Pasay City, the largest of the campaign so far, was a remarkable show of force, which he hoped wasn’t yet reflected in pre-election polls.

“Indeed it was a grand rally, [spanning a] few kilometers on Macapagal, not only the number but the passion of those attending. It’s obvious they were not shuttled or bussed in,” Drilon said.

During the rally, actors John Arcilla, Angel Locsin, and Vice Ganda gave the most impassioned speeches on why they chose to support Robredo.

“This is what true love for country looks like,” Arcilla said. “Standing up because we don’t want corruption or any form of injustice, because these two things are the reasons why so many of us are suffering.”

He said he chose Robredo “because of what she has done, what she is doing, and what she will be doing.”

An emotional Locsin, meanwhile, reminded Filipinos that they themselves will suffer every time they choose the wrong candidates.

“If we want change, let’s stop voting for political dynasties because our problems will recur again and again,” she said.

“Every election, we get together to help a candidate win. Instead, we should help ourselves, our families and our country win … We should be the winners,” Vice Ganda said.

“So my gift to the Filipino people is my vote for Leni Robredo,” the talk show host said. It was the first time Vice Ganda came out in public to support Robredo.

Robredo, who turned 57 that day, thanked the celebrities for “gambling on the Leni-Kiko tandem” even though they were not the current survey front-runners.

Drilon said the energy of the crowd spelled the difference from the rallies of the other candidates.

“The last time I saw this was in 1986. I have confidence that with all the difficulty, the people’s will will be shown and find its way when the people cast their ballots,” he said, referring to the mass demonstrations in 1986 that culminated in the Edsa Revolution.

Drilon also addressed criticisms that the Robredo campaign was elitist, saying the pivot to accepting all political colors and not just pink showed how her camp was receptive to feedback.

Drilon said Robredo’s opponent, Manila Mayor Francisco Domagoso, was wrong to accuse Robredo of bullying other candidates to force them to withdraw.

“I have never seen a candidate who is more gentle than Leni. She is very pleasant. That allegation has no basis. The perception is not reality,” he said.