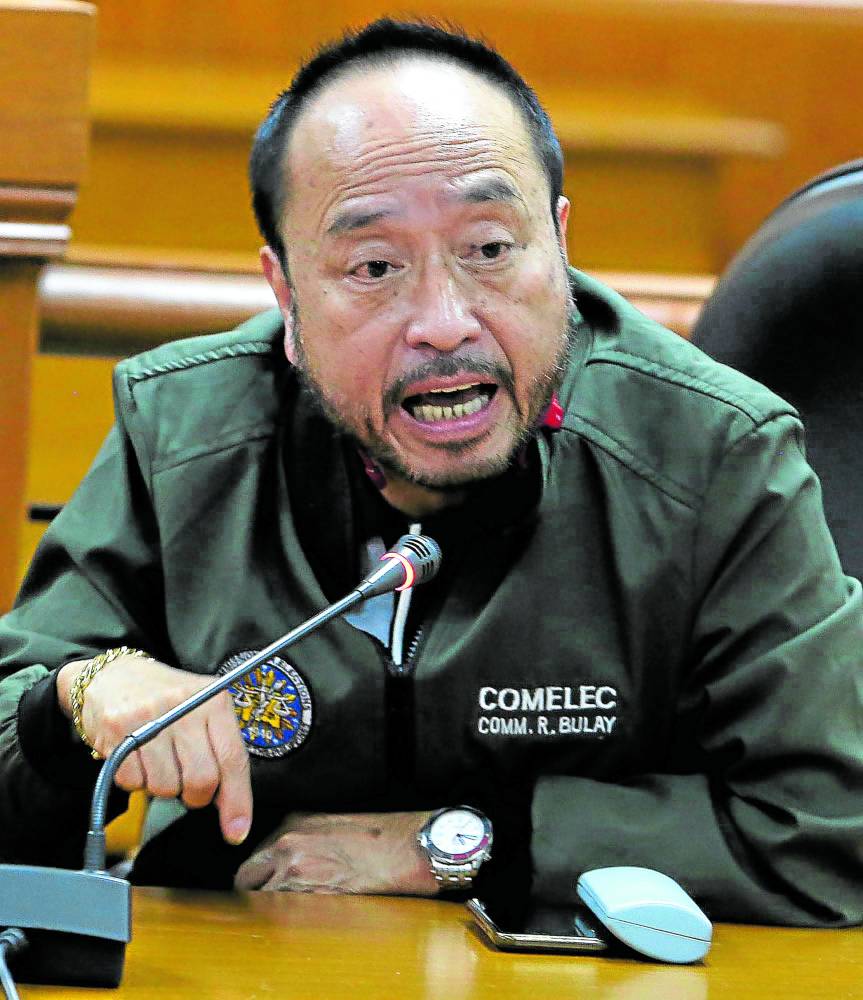 MANILA, Philippines — One of the seven commissioners of the poll body on Friday warned that he would not tolerate insinuations or allegations of partisanship against the Commission on Elections (Comelec) from candidates in the May 9 national elections or their supporters.

“To those issuing public opinion that Comelec is biased or that it would cause election fraud, I am warning you that we would not hesitate to call upon the Armed Forces of the Philippines, which is now under Comelec control, to round you up and have you jailed,” Commissioner Rey Bulay said during a press briefing.

The former Manila city prosecutor said that the Comelec as a whole and his fellow commissioners were determined to conduct a credible, peaceful and clean elections.

“That’s why I am personally issuing this warning … and I will not think twice about filing cases against those of you who sow discord,” he said in a stern and angry voice.

Bulay, 63, was appointed by President Duterte to the Comelec in November last year.

A San Beda College of Law alumnus like Mr. Duterte, he also served as a member of the Presidential Commission on Good Government and as a Muntinlupa City councilor from 1988 to 1998 and from 2007 to 2010.

Bulay made the threats of arrest to support a statement from Commissioner Socorro Inting who said that it was unnecessary to call on the Comelec to hold a “nonpartisan” election.

Inting, in turn, was commenting on an appeal made by a group of supporters of presidential candidate and Vice President Leni Robredo called AIM (Asian Institute of Management) Alumni for Leni.

“The appeal of AIM Alumni for Leni calling for nonpartisanship and for holding of orderly, peaceful and credible elections on May 9, 2022, is … unnecessary as it tends to sow distrust on the integrity of the Comelec,” Inting said in a statement.

“Worse, the appeal … subtly conditions the minds of Filipinos that the upcoming elections is not credible should Vice President Leni Robredo lose in the presidential race,” she added.

With just two weeks left before the elections, Inting said that casting doubts on the integrity of the poll body “without sufficient basis” only “betrays the honest and tireless efforts” of the poll workers who had been laboring hard to ensure the success of next month’s elections.

Inting’s statement was read by Commissioner Aimee Ferolino during the press briefing.

Ferolino herself said calls for nonpartisanship were “welcome” because that meant that people were “actively watching and participating in the elections.”

“But … when you cast doubts, that’s what makes me apprehensive,” she said.

The AIM Alumni for Leni had addressed a letter of appeal to the Comelec, the Department of Education, the Philippine National Police, the AFP and other deputized agencies, asking them to be nonpartisan, to make voting safe and “to protect the will of voters as expressed on the ballot.”

“Our collective interest is for our candidates to be elected through a credible process. When elections are credible, the results will be accepted and the transition to the new government will be peaceful and orderly,” the group said.

Poll watchdog Kontra Daya convenor Danilo Arao said the threats to freedom of expression were “counterproductive to democracy of which elections are an inherent part.”

He said Comelec officials should listen to “public sentiments,” including those critical of them.

“Raising doubts is valid at a time when there are perceptions of lack of accountability and transparency,” Arao said.

A member of the AIM group has not replied to the Inquirer’s request for comment on Bulay’s threats and the statements from Inting and Ferolino.

Founded in 1968, AIM is a graduate school and research institution focused on business, management and economy. It has around 40,000 alumni worldwide, both in private business and government service.

Its Filipino alumni can be found across the political spectrum.