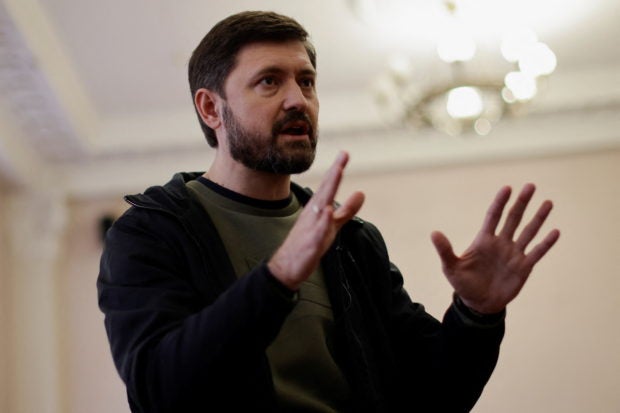 Mariupol Mayor Vadym Boichenko speaks during an interview with Reuters, amid Russia’s invasion of Ukraine, at an undisclosed location in Ukraine, April 21, 2022. REUTERS/Ueslei Marcelino

Earlier Putin claimed victory in the battle for Mariupol after nearly two months of siege that has led to the most intense battles of the war and its worst humanitarian catastrophe. Under heavy bombardment, citizens who did not flee have suffered without electricity, heating or water.

“It’s important to understand that the lives that are still there, they are in the hands of just one person – Vladimir Putin. And all the deaths that will happen after now will be on his hands too,” Boichenko said in an interview.

Putin on Thursday said Russian troops had “liberated” Mariupol, which would make it the biggest city to fall into Russian hands since the start of what Moscow calls a “special military operation.” Russia denies targeting civilians.

“There were no plans to liberate the city. It was a plan of destruction,” Boichenko said. He estimated that 90% of the southeastern port city had been damaged or destroyed since Russia invaded Ukraine on February 24.

“Today at all levels, we only talk about one thing – that we need a ceasefire, we need a full evacuation of the 100,000 Mariupol residents who are prisoners of Russian forces, and we need to free all the people who are at Azovstal.”

While Russian troops now control most of the city, a contingent of Ukrainian fighters is holding out in the underground bunkers of the Azovstal steel complex, alongside hundreds of civilians in desperate conditions, according to Ukrainian authorities.

Putin had told the defenders to lay down their weapons and surrender or die.

“The soldiers are not willing to surrender, they are willing to leave only with weapons in their hands and continue defending our homeland, our Ukraine,” said Boichenko, who became mayor in 2015.

Boichenko said he still had hope something could be done to help those trapped in the city despite the failure of a ceasefire agreement this week under which 90 buses were meant to evacuate about 6,000 people.

Ceasefire deals have repeatedly fallen through, with both sides trading blame. Many of those who have left have fled in private cars or on foot.

A small convoy was able to leave the city on Wednesday, reaching the Ukraine-controlled city of Zaporizhzhia on Thursday.

“Today was a historic event – 57 days of war, and only the first four buses left Mariupol,” Boichenko said.

The city administration believes tens of thousands of Mariupol residents have been killed since the start of the war while admitting the challenges of estimating an accurate death toll as fighting rages.

On Thursday, a review of satellite images by U.S. company Maxar Technologies showed a mass grave site just outside Mariupol that has expanded in recent weeks to contain more than 200 fresh graves.

Boichenko said the photos were evidence that Russian forces were burying bodies to conceal the scale of the death toll in the city. Russia denies what Ukraine says is evidence of atrocities, calling them staged.

“It’s a fact. They brought them, tipped them out, and buried them. That is what they do, cynically hiding their war crimes in these mass graves,” Boichenko said.