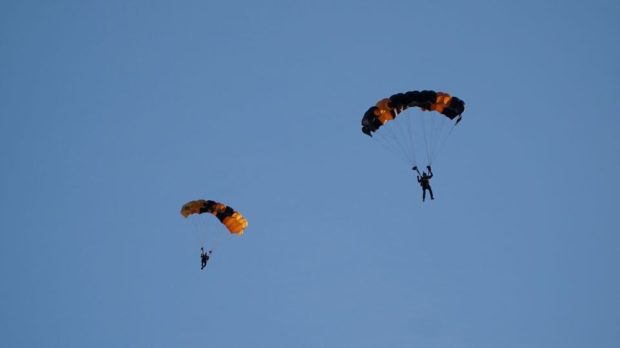 WASHINGTON — Aircraft from the U.S. Army’s Golden Knights parachute demonstration team sparked a security scare at the U.S. Capitol on Wednesday during a performance over the nearby Washington Nationals baseball stadium, prompting an evacuation of the halls of Congress, police said.

U.S. House of Representatives Speaker Nancy Pelosi called the security alarm an “outrageous and frightening mistake” by the Federal Aviation Administration (FAA) for failing to notify the Capitol Police of the pre-planned parachute demonstration. She said Congress would examine the results of a review into the incident to determine what went wrong.

The U.S. Capitol Police first said they were tracking an aircraft that posed a “probable threat” to the Capitol complex, and then minutes later said there was no threat and that the building had been evacuated out of an abundance of caution.

Police later said the plane was a military aircraft carrying members of the U.S. Army’s Golden Knights parachute demonstration team. The FAA did not notify police in advance, the Capitol police told congressional staff and others in a letter.

The Golden Knights then parachuted into the Washington Nationals’ baseball stadium, Nationals Park, a little over a mile away from the U.S. Capitol.

“The unnecessary panic caused by this apparent negligence was particularly harmful for members, staff and institutional workers still grappling with the trauma of the attack on their workplace on January 6th,” Pelosi said in a statement late on Wednesday, referring to the attack on the Capitol on Jan. 6, 2021.

The FAA has begun a review of the incident, a source familiar with the matter told Reuters. The FAA declined to comment.

The aircraft, a single-engine plane, was reported to be circling around Washington after taking off from Joint Base Andrews in Maryland, CNN reported.

“Congress looks forward to reviewing the results of a thorough after-action review that determines what precisely went wrong today and who at the Federal Aviation Administration will be held accountable for this outrageous and frightening mistake,” Pelosi said.

A year after Capitol siege, US democracy still faces test