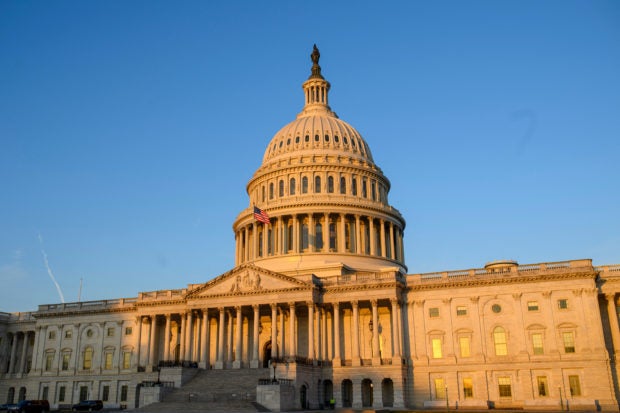 In this file photo taken on March 1, 2022 the US Capitol is seen in Washington, DC.  Police at the United States Capitol ordered the complex be evacuated on April 20, 2022, saying it was “tracking an aircraft that poses a probable threat” — but swiftly issued an update to say the craft did not pose any danger. (AFP)

WASHINGTON – The US Capitol was briefly evacuated Wednesday after authorities sounded a threat alarm over a harmless parachute stunt, prompting top lawmaker Nancy Pelosi to blast aviation officials for an “inexcusable” failure.

Police tasked with protecting the complex at the heart of US government in Washington issued an initial statement shortly after 6:30 pm (2230 GMT) saying they had ordered an evacuation as they were “tracking an aircraft that poses a probable threat.”

They did not give further details. But it turned out the mini-crisis was triggered by a pre-planned flyover at nearby Nationals Stadium.

The news became a top headline within minutes in the United States, where the memories of September 11, 2001 attacks — which saw Al-Qaeda fly passenger jets into the World Trade Center in New York and the Pentagon in Washington — and the January 6, 2021 storming of the Capitol by protesters are still poignant.

US Capitol Police swiftly issued a second statement to say the order had been given “out of an abundance of caution,” that there was now “no threat” to the complex and that buildings had reopened for use.

Neither the House of Representatives nor the Senate, the chambers of Congress that are located in the Capitol, were in session at the time of the scare.

But the incident enranged Speaker of the House Pelosi, who fired off a withering statement soon after the evacuation order was lifted blasting the Federal Aviation Administration over the apparent misunderstanding.

The FAA’s “apparent failure” to notify Capitol police of the planned flyover was “outrageous and inexcusable,” Pelosi said.

“The unnecessary panic caused by this apparent negligence was particularly harmful” for those still facing trauma from the January 6 attack on the Capitol, she said, adding that Congress would review “what precisely went wrong today and who at the Federal Aviation Administration will be held accountable for this outrageous and frightening mistake.”

There was no immediate explanation for the order, but Pelosi was clear it came after a parachute display that was part of a baseball pregame show for “Military Appreciation Night” at Nationals Stadium.

NBC’s Capitol Hill correspondent Garrett Haake tweeted that he had “Just watched some people parachute down over/near the US Capitol amid an evacuation order.”

“Seems they might not have told Capitol Police they’d be in the airspace. One officer here told me she saw the small plane appearing to circle before the parachuters jumped,” Haake tweeted.

The stadium is roughly 1.5 miles (2.5 kilometers) from the Capitol. The Nationals were playing the Arizona Diamondbacks there Wednesday.

The US Capitol was the focal point of an actual violent attack just 15 months ago, when supporters of then-president Donald Trump stormed the building in an effort to stop certification of Joe Biden’s presidential election victory.

Despite Wednesday’s scare being a false alarm, lawmakers and visitors were shaken by the warning.

“We just went through a very stressful 15 minutes, but we are thankful that everyone is safe,” congresswoman Teresa Leger Fernandez said on Twitter.

CNN’s congressional correspondent Ryan Nobles said he was among those evacuated, and that “for a good 15 minutes it was pretty frantic.”

“The alarms were loud and intense and Capitol Police were not messing around getting people out,” he tweeted.

Two young Swiss tourists visiting Washington said they were walking towards the historic white domed Capitol to take a tour when police waved them away from the structure.

“They shut the security barriers behind us. They didn’t tell us why and I thought it was better not to ask,” one of the tourists, who asked not to be named, told AFP.