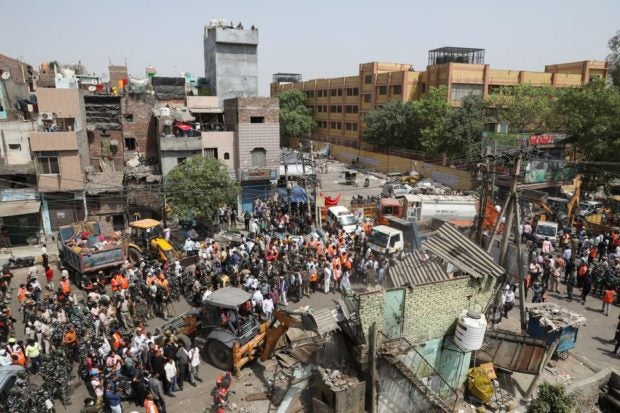 The drive to demolish the properties came four days after violence there during a Hindu religious procession.

A three-judge bench of the top court, headed by the Chief Justice of India N.V. Ramana, ordered that the status quo should be maintained in the case until the next hearing, slated for Thursday.

The petitioner to the court said the municipal authorities had not alerted the local shopkeepers before the razing operation.

Local police and members of the paramilitary forces, all of whom report to the federal home ministry, were present on Wednesday in Jahangirpuri, a residential area about 25km (14 miles) from the Indian Parliament.

Hundreds of officers in riot gear, backed with seven bulldozers, surrounded a few shops in a small Muslim pocket of the area. Some scrap dealers left the site in the morning ahead of the demolition.

A senior police officer overseeing the demolition said adequate forces had to be deployed to ensure civic authorities could do their job peacefully.

“We are here to provide protection, and to maintain law and order,” said Deependra Pathak, a senior police official at the site.

So far, police have arrested at least 20 people in connection with the Hindu-Muslim clashes that erupted during a Hanuman Jayanti procession amid celebrations over the weekend.

India in recent weeks has witnessed a spurt in small-scale religious clashes between Hindus and Muslims.

Recent demolition drives after communal clashes in several parts of India have sparked outrage, with critics calling it an attempt to install fear among India’s 200 million Muslims by Prime Minister Narendra Modi and the BJP.

BJP leaders and hardline Hindu leaders affiliated with his party reject the allegation.

This month several homes and shops were torn down in the central state of Madhya Pradesh and western Gujarat state in the aftermath of communal violence on the day of another Hindu festival.

Both states are ruled by the BJP.

How India’s most crowded city beat the odds, and the virus