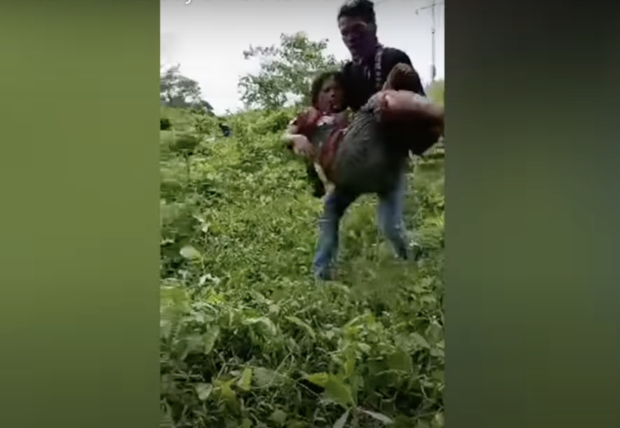 The group of presidential bet Ka Leody de Guzman witnessed a series of gunshots fired just as members of the Manobo tribe unfurled a white flag to show that they came in peace in an ancestral land in Bukidnon. Image from David D’Angelo

“It is  premature to say that the motive is election-related since we are still gathering enough evidence and determining the circumstances surrounding the incident,” Alba said in a statement.

“Nevertheless, the PNP vows to continue with the investigation to find out what really happened at mananagot ang dapat managot,” he further said.

While it was not immediately known if he was really a target, De Guzman was not hurt during the incident, but one farmer-organizer and four other tribal members were hurt when the security guards of a pineapple plantation in Quezon, Bukidnon fired upon members of the Manobo-Pulangihon indigenous tribe who were trying to occupy a portion of their claimed ancestral domain on Tuesday.

As part of their sortie in Mindanao, De Guzman and his two senatorial aspirants visited the Manobo community and later accompanied some of them in occupying some four hectares of the uncultivated part of the plantation.

The candidates, however, did not properly coordinate with authorities, according to Alba.

Alba also reminded the candidates to coordinate so the PNP could provide security assistance.

The incident was met with a torrent of condemnation from different sectors and groups. No less than Malacañang called the incident “cowardly.”

The Commission on Elections also said they will investigate the incident.