‘I’m not running’: The most eaten words in PH politics 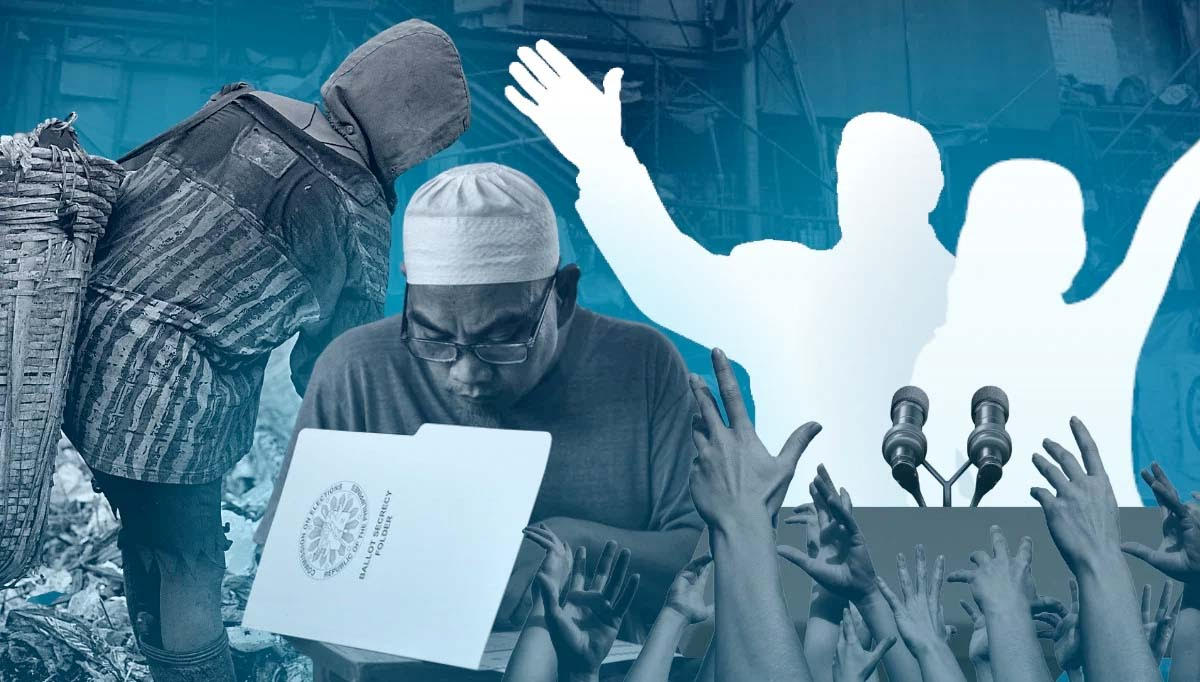 MANILA, Philippines—In 2015, Rodrigo Duterte, then mayor of Davao City, was asked if he was running for president in 2016. His answer was clear: I will not seek the presidency. I am sorry.

Duterte had said he “will retire from politics for good” in 2016 and his time in politics has run out. But he stressed on one thing—he had no ambition to become president.

“The country does not need me. I find no need for it. I guess it is fate that our long journey together should end this way,” he said as he asked for understanding and acceptance to those clamoring for him to run for president.

“I believe that my destiny is to end years and years of public life in the service of Davao City. When all is said in the wake of this decision, perhaps we can find comfort in the thought that this is indeed a beautiful day to end a wild dream.”

But on Nov. 27, 2015, as he withdrew his bid to seek reelection in Davao City, he filed his certificate of candidacy (COC) for president to replace Martin Diño, who had been fielded by PDP-Laban as presidential candidate.

Maria Ela Atienza, a political science professor of the University of the Philippines, said running for president is a very important decision, especially since Malacañang is not an easy office.

She told INQUIRER.net that those who say they really want to become president from the very beginning are either “visionary or very ambitious” people. “I don’t think people would normally aspire to be president,” she said.

Last Sunday (April 17), Manila Mayor Isko Moreno, who is running for president, stressed on what he said were promises made by Vice President Leni Robredo to not run for president to paint her as someone who cannot be trusted.

“I was fooled also in the face by the Vice President. She said to my face, 1,000 times, that she will not run for president,” said Moreno in the now controversial press conference he held at the five-star hotel Manila Peninsula with fellow presidential candidates Norberto Gonzales and Ping Lacson.

“We were made to believe to unite, but we were fooled, literally in our face. That kind of person cannot be trusted.”

In 2020, Robredo said she had no plans to run for president because she believed that the presidency was not an office one can plan for. “It is always a possibility. But, for me, the presidency is destiny.”

Last year, Robredo said that while she had no plans to seek the presidency, she told GMA News that she was not shutting the door to running again for another position.

This was the reason that she said that selecting the person who should run for president in 2022 should depend on that person’s capability in fixing the country’s problems.

Last Feb. 27, Robredo said in CNN Philippines’ Presidential Debate that she changed her mind about running for president because “we saw how the beliefs, the mindsets of so many Filipinos were hit by fake news, by disinformation”.

READ: Robredo explains in debate why she broke her vow not to run

When she declared her presidential bid last year, she stressed that her resolve was strong: “We need to free ourselves from the current situation. I will fight, we will fight”.

On Feb. 27, Robredo was shown a video clip of CNN Philippines’ Vice Presidential Debate in 2016 where she and former Sen. Ferdinand Marcos Jr. vowed not to run for higher office—president.

Robredo stressed that this was the politics that really “brought all of us a lot of suffering”. “Because of that threat, I tried to unite the contenders, that way I don’t have to run,” she said.

Last year, Robredo, who filed her COC for president on Oct. 7, was trying to get Moreno, Lacson and Sen. Manny Pacquiao to be with her in the so-called unity talks that she initiated.

Moreno, in 2019, the year he was elected mayor of Manila, likewise said he had no plan to run for president, stressing that he will instead focus on serving the people of Manila.

“It’s not on my mind. In fact, after serving as mayor, I will teach. Honestly, I have been giving lectures on local governments. I can share my experiences,” he said then.

Last year, he even told CNN Philippines that he had no plan to launch a presidential bid in 2022, saying that his focus will be on Manila and the COVID-19 crisis.

“If we can offer a lot of things to ease the burden, the effects of this pandemic to the lives of every family in the city of Manila, I will do so,” Moreno, who was fourth in a Pulse Asia survey, said then.

READ: Isko Moreno says he has no plans to run for president

He, however, eventually declared his presidential bid: “You’ve known me for my honest leadership and straight talk. Hard work. Whether it is about city projects or personal beliefs, I convey it with candor and I do not play coy.”

Atienza said one motivation for politicians to eat their words could be the clamor to “unify democratic or progressive sectors for possible advancement or higher chances of winning.”

As voters change their minds, politicians can change theirs, too. This is a human trait, she said when asked if “change of plans” should be taken positively or negatively.

“What voters should watch out for is what motivates people to run. Is it for selfish, personalistic interests or is it to serve the people?” Atienza said. 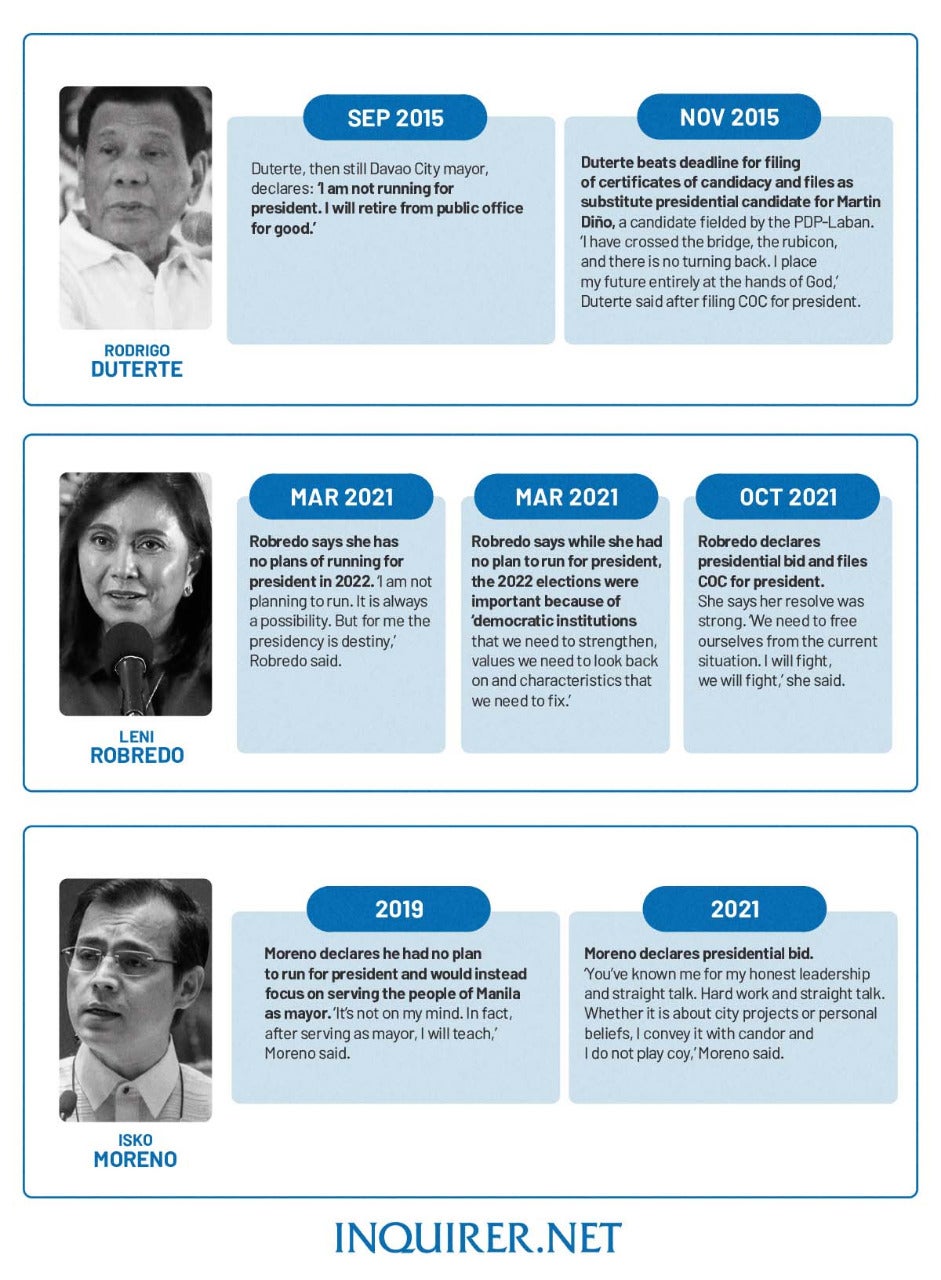 Duterte’s change of mind in 2015 was not the first in the Philippines. A review by INQUIRER.net showed that flip-flopping about running for president was very common.

Arroyo was elected vice president in 1998, but as then President Joseph Estrada was ousted in 2001 because of corruption, she became the 14th President.

In December 2002, two years since taking over the presidency, Arroyo said in Baguio City that she had already decided not to seek the presidency in 2004, saying that with her decision, she felt “relieved of the burden of politics”.

She said then that an immense political effort would be needed on her part if she were to seek the presidency. However, the problem was she was one of the “principal figures in the divisive national events”.

“Since I am one of the principal figures in the divisive national events in the last two or three years, our political efforts would result in a never-ending divisiveness,” Arroyo said.

In 2003, however, she said, “I deferred my retirement,” stressing that she felt compelled to seek a new term because of the socio-economic problems of the Philippines.

“I have gained the experience necessary to understand what we need to do in order to change society in a way that leads to economic development and the elimination of poverty,” she said.

Estrada, who was ousted by People Power in 2001 and convicted of plunder in 2007, was sentenced to life, but his civil and political rights were restored as Arroyo granted him executive clemency.

It was on Oct. 25, 2008 when Arroyo signed the pardon which granted executive clemency to Estrada. The pardon said Estrada, who has been in detention for six and a half years, has committed to no longer run for any public office.

In 2008, as then presidential spokesperson Ignacio Bunye reminded Estrada of a constitutional ban on reelection, the former president told Malacañang that he had no intention to seek the presidency.

However, in 2009, Estrada told Reuters that he will definitely seek the presidency, stressing that winning the elections would be a “vindication”. He said, “One more chance and that’s it”.

“It’s really the last performance of my life. I have no more ambition in life except that when I exit, I be remembered as the man who championed the cause of the masses,” he said.

Estrada, who said “they were not able to prove anything” despite his conviction, admitted that he got so “frustrated” that his presidency was cut short and that he was not able to continue his programs for the poor.

In 2012, Roxas, who was then the president of the Liberal Party, told the INQUIRER that he will not seek the presidency in 2016: “I can honestly, sincerely, absolutely, transparently tell you that I have no plans.”

In 2009, Roxas slid down to give way to then Sen. Benigno Aquino III in the presidential race. “Bayan bago sarili,” he said. When Aquino won in 2010, he had said he would have Roxas seek the presidency in 2016.

Sen. Franklin Drilon, who was Team PNoy’s campaign manager in 2013, said Roxas will be the Liberal Party’s standard bearer in 2016, but Roxas stressed that he has no plans yet.

In 2015, Roxas declared his presidential bid, saying that he accepted the challenge to continue Aquino’s legacy of “Daang Matuwid”: “I will not stray from the straight path. I will give everything, I will leave nothing to myself.”

This, as Drilon told Radyo Inquirer earlier that year that “As of now, Mar Roxas has expressed interest internally that he wants to offer his candidacy to the public, and the party will probably endorse that. So as of now, it’s Mar Roxas.”

READ: Surprise: Roxas tells LP he will run in 2016

Poe, who was elected senator in 2013, said in 2014 that she was not considering “anything higher at this point,” stressing that she did not feel that she was ready.

Later that year, she insisted that she had no intention to seek the presidency in 2016, saying that people should not read too much into her use of the “campaign line” of her father, Fernando Poe Jr.

READ: Poe: No plans to run for president in ’16

Poe, in 2014, said she was not considering “anything higher at this point,” stressing that “I don’t feel I’m ready at this point”. She reiterated this later that year: “No plans at all”.

In 2015, she declared her presidential bid, saying that “I wanted to continue what my father FPJ had started”. As she asked Filipinos then to help her in crafting a bright future for the Philippines, “I offer myself for the country’s highest calling as your president”.