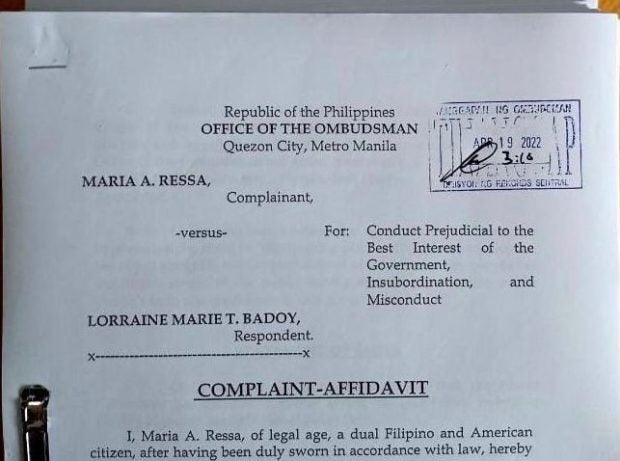 A photo of the upper portion of the front page of a complaint lodged by Maria Ressa against Lorraine Badoy before the Office of the Ombudsman. Contributed photo

MANILA, Philippines — Nobel laureate Maria Ressa on Tuesday filed before the Office of the Ombudsman an administrative complaint against Presidential Communications Operations Office Undersecretary Lorraine Badoy over her “malicious and defamatory remarks” against the Rappler chief executive officer.

The complaint accuses Badoy of violations of Republic Act No. 6713 of the Code of Conduct and Ethical Standards for Public Officials for her Facebook posts where she called Ressa a “sociopath,” “rotten soul,” and “master bulls***r,” among others.

Badoy, in one of her Facebook posts, also called last year’s Nobel Peace Prize awarded to the journalist as “Nobel Piss Prize.”

The complaint argues that Badoy’s posts “are malicious and defamatory remarks which transgress boundaries of professional decorum and protocol.”

“Her attacks have also emboldened others to join in their vicious attacks against me,” Ressa said in the complaint.

“These defamatory remarks diminish my reputation and are highly improper considering it came from Respondent Badoy, a high-ranking government official who is expected to observe ‘the highest degree of excellence, professionalism, intelligence and skill’ as required by Section 4(A) of the Code of Conduct and Ethical Standards.”

Badoy, who also serves as spokesperson of the National Task Force to End Local Communist Armed Conflict (NTF-Elcac), has likewise called Ressa – a multi-awarded journalist – “a common criminal and mouthpiece of enemies of the state” and Rappler a “friend and ally” of the Communist Party of the Philippines.

Ressa noted in her complaint that these pronouncements from a public official “created a real and imminent threat of a violent attack against myself who is targeted by acts of harassment.”

She said these “targeted acts of harassment” identify her to government officials and their supporters as an enemy and “implicitly grants permission if not encourages, further attacks.”

“I am filing this administrative complaint against Respondent Badoy, without prejudice to my other legal remedies, pursuant to my profession as an investigative journalist for more than thirty-six years with a long track record of holding those in power to account,” said Ressa.

“These posts by Respondent Badoy have served as the rallying point for other persons to attack and harass myself, Rappler, and other journalists for simply doing our job: fact-checking and pursuing the truth. This is easily seen in the hundreds of cruel, malicious, and malevolent comments from other persons attacking me and my fellow journalists.

“Thus, I seek to hold Respondent Badoy accountable for failing to uphold the highest standards of professionalism as well as to observe proper decorum and decency that tarnishes the reputation of public office,” the Rappler executive pointed out.

Badoy, in a statement in March, claimed that the charges against her and other NTF-Elcac officials were just intended for propaganda purposes. She also the anti-insurgency task force has “a mountain of cases” that it is set to be filed or have been filed against the leftist groups.

In a radio program, Badoy likewise described the charges filed against her as “foolishness” and “personally interesting.” She said she was not afraid of the charges and vowed to turn the tables on the complainants.