I hope next admin will do better vs climate change – Duterte

MANILA, Philippines — President Rodrigo Duterte, whose term ends in a little over two months, hopes the next administration will do better in addressing climate change since the Philippines is one of the most affected by this phenomenon.

“They have a better preparation — or whatever efforts that would contribute to at least remedy the situation,” Duterte, speaking in a mix of Filipino and English, said in his weekly taped “Talk to the People” briefing that aired late on Monday.

“I leave it, I say, to the next administration,” he said. “I know they can do better than I can. Whatever this typhoon did, I could not stop it,” he said.

He was referring to Tropical Storm Agaton (internationally known as Megi), which had just cut through the Visayas and left at least 172 people dead and 110 others missing.

Earlier in his briefing, he proposed that richer, industrialized countries, since they produce more pollution, should pay smaller countries like the Philippines for the damage caused by climate change.

Two years earlier, he blamed climate change for the severe weather disturbances that had been causing massive flooding in many areas in the Philippines. 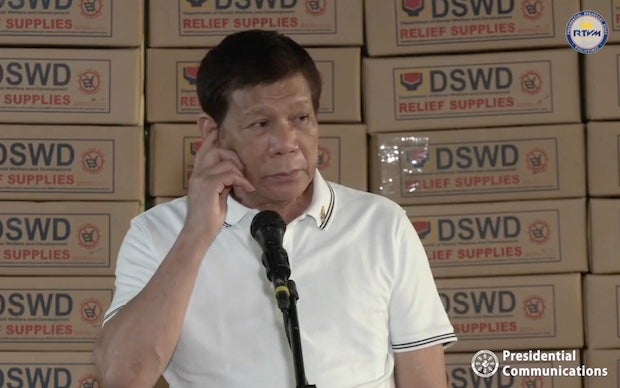 President Rodrigo Duterte visited the evacuation center set up at the Pontevedra Elementary School in Capiz on Saturday, April 16, 2022, and distributed relief goods. (Photo from an RTVM video.)