Get this straight: Curls bounce back in Cairo | Inquirer News

Get this straight: Curls bounce back in Cairo 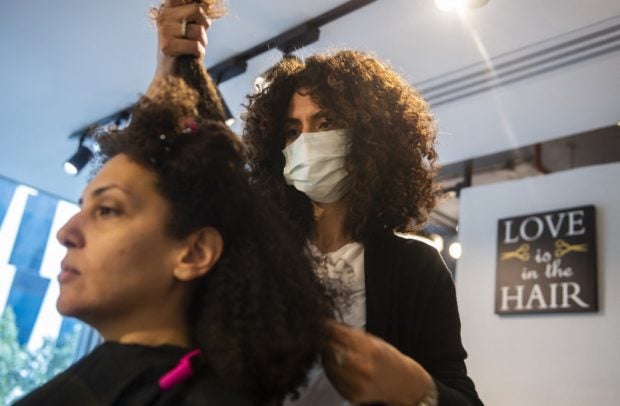 For Rola Amer and Sara Safwat, their curls were once a career-hindering nuisance. Now part of an aesthetic liberation movement sweeping Egypt in recent years, they own a curly hair salon that caters to women and men like them.

Amer used to spend hours straightening her bouncy curls, she told Agence France-Presse (AFP) as she began her day at the Curly Studio, which became Egypt’s first natural hair salon in 2018.

“Curly hair takes a lot longer to cut than straight hair,” Amer said, meticulously snipping her way through a client’s curly mane in an affluent suburb of Cairo.

Three hours later, she can finally show the result to her client, and both are delighted as the salon buzzes around them.

It’s a far cry from Amer’s own experience a few years ago. “If I ever left my hair curly, I’d feel shaggy, like I wasn’t taking care of myself,” she said.

In this rare type of salon in Cairo, the final product fits each client’s curl pattern, and rollers have replaced straightening irons to prevent heat damage.

Safwat, 38, explained the dangers of straightening, adjusting her curly bangs as she spoke.

“One time, a mother brought her 3-year-old daughter. She had tried a chemical treatment to straighten her hair, and now it was falling out,” she said.

The obsession with straight hair, rooted in what Safwat calls “completely false beauty ideals,” compelled generations of women to burn their hair to a crisp using chemical treatments and excessive heat damage.

With her curls considered “unprofessional” Safwat says that, before she became a hairdresser, she would often be asked in job interviews: “Will you be coming in to work like this?”

In the early 2000s, Lebanese singer Myriam Fares was one of the first curly-haired icons in the Middle East.

Halfway across the world, Black women in the United States were increasingly embracing their curls in a natural hair care movement. Many of the biggest brands built by Black women at the time would eventually find their way onto the shelves of curly salons in Cairo.

In 2012, Egyptian actress Dina el-Sherbiny became one of the first to break the taboo on screen, flaunting her chestnut curls in hit TV series “Hekayat Banat” (Girls’ Stories).

Read Next
Show us proof of ‘negative judgment’ on Lipa apparitions
EDITORS' PICK
Marcos wants to accelerate efforts to build agricultural sector back
Bongbong Marcos to slain journalist’s kin: ‘We are ready to help’
House energy committee chair Arroyo bats for cheap electricity
Score lots of freebies and discounts on vivo 10.10. Sale
34 people killed in mass shooting at daycare center in Thailand
Smart awards ‘Subscribe & Get Lucky’ Raffle Promo winners
MOST READ
Marcos admin gets high approval ratings in Pulse Asia survey
Marcos wants to accelerate efforts to build agricultural sector back
Vicki Belo recounts battle with breast cancer in 2016: ‘I was told I was going to die’
PBA: Chot Reyes gets fine for outburst in TNT loss to Magnolia
Don't miss out on the latest news and information.